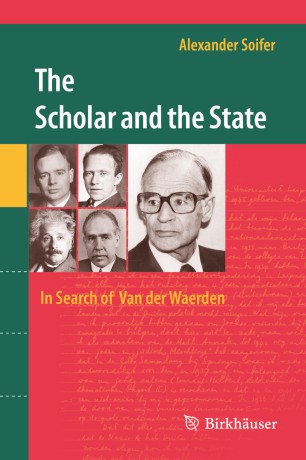 The Scholar and the State: In Search of Van der Waerden

Bartel Leendert van der Waerden made major contributions to algebraic geometry, abstract algebra, quantum mechanics, and other fields. He liberally published on the history of mathematics. His 2-volume work Modern Algebra is one of the most influential and popular mathematical books ever written. It is therefore surprising that no monograph has been dedicated to his life and work. Van der Waerden’s record is complex. In attempting to understand his life, the author assembled thousands of documents from numerous archives in Germany, the Netherlands, Switzerland and the United States which revealed fascinating and often surprising new information about van der Waerden. Soifer traces Van der Waerden’s early years in a family of great Dutch public servants, his life as professor in Leipzig during the entire Nazi period, and his personal and professional friendship with one of the great physicists Werner Heisenberg. We encounter heroes and villains and a much more numerous group in between these two extremes. One of them is the subject of this book.

Soifer’s journey through a long list of archives, combined with an intensive correspondence, had uncovered numerous details of Van der Waerden’s German intermezzo that raised serious questions and reproaches.

Professor Soifer’s book implicates the anthropologists’ and culture historians’ core interest in the evolution of culture and in the progress of human evolution itself on this small contested planet.

The book is fascinating.  Professor Soifer has done a great service to the discipline of history, as well as deepening our understanding of the 20th century.

This book is an important contribution to the history of the twentieth century, and reads like a novel with an ever-fascinating cast of characters.

This is a most impressive and important book. It is written in an engaging, very personal style and challenges the reader’s ability of moral and historical judgment. While it is not always written in the style of ‘objective’ professional historiography, it satisfies very high standards of scholarly documentation. Indeed the book contains a wealth of source material that allows the reader to form a highly detailed picture of the events and personalities discussed in the book. As an exemplar of historical writing in a broader sense it can compete with any other historical book.