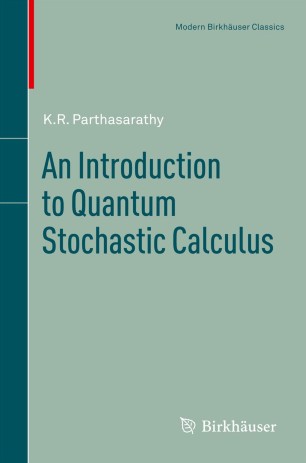 An Introduction to Quantum Stochastic Calculus

An Introduction to Quantum Stochastic Calculus aims to deepen our understanding of the dynamics of systems subject to the laws of chance both from the classical and the quantum points of view and stimulate further research in their unification. This is probably the first systematic attempt to weave classical probability theory into the quantum framework and provides a wealth of interesting features:

The origin of Ito’s correction formulae for Brownian motion and the Poisson process can be traced to commutation relations or, equivalently, the uncertainty principle.
Quantum stochastic integration enables the possibility of seeing new relationships between fermion and boson fields.
Many quantum dynamical semigroups as well as classical Markov semigroups are realised through unitary operator evolutions.

The text is almost self-contained and requires only an elementary knowledge of operator theory and probability theory at the graduate level.

This is an excellent volume which will be a valuable companion both for those who are already active in the field and those who are new to it. Furthermore there are a large number of stimulating exercises scattered through the text which will be invaluable to students.
(Mathematical Reviews)

This monograph gives a systematic and self-contained introduction to the Fock space quantum stochastic calculus in its basic form (...) by making emphasis on the mathematical aspects of quantum formalism and its connections with classical probability and by extensive presentation of carefully selected functionalanalytic material. This makes the book very convenient for a reader with the probability-theoretic orientation, wishing to make acquaintance with wonders of the noncommutative probability, and, more specifcally, for a mathematics student studying this field.
(Zentralblatt MATH)

Elegantly written, with obvious appreciation for fine points of higher mathematics (...) most notable is [the] author's effort to weave classical probability theory into [a] quantum framework.
(The American Mathematical Monthly)