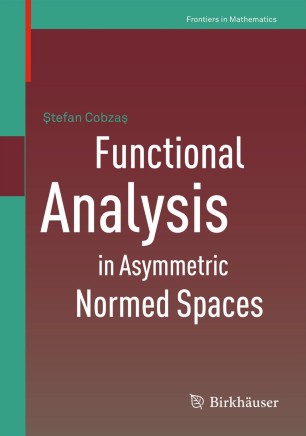 An asymmetric norm is a positive definite sublinear functional p on a real vector space X. The topology generated by the asymmetric norm p is translation invariant so that the addition is continuous, but the asymmetry of the norm implies that the multiplication by scalars is continuous only when restricted to non-negative entries in the first argument. The asymmetric dual of X, meaning the set of all real-valued upper semi-continuous linear functionals on X, is merely a convex cone in the vector space of all linear functionals on X. In spite of these differences, many results from classical functional analysis have their counterparts in the asymmetric case, by taking care of the interplay between the asymmetric norm p and its conjugate. Among the positive results one can mention: Hahn–Banach type theorems and separation results for convex sets, Krein–Milman type theorems, analogs of the fundamental principles – open mapping, closed graph and uniform boundedness theorems – an analog of the Schauder’s theorem on the compactness of the conjugate mapping. Applications are given to best approximation problems and, as relevant examples, one considers normed lattices equipped with asymmetric norms and spaces of semi-Lipschitz functions on quasi-metric spaces. Since the basic topological tools come from quasi-metric spaces and quasi-uniform spaces, the first chapter of the book contains a detailed presentation of some basic results from the theory of these spaces. The focus is on results which are most used in functional analysis – completeness, compactness and Baire category – which drastically differ from those in metric or uniform spaces.  The book is fairly self-contained, the prerequisites being the acquaintance with the basic results in topology and functional analysis, so it may be used for an introduction to the subject. Since new results, in the focus of current research, are also included, researchers in the area can use it as a reference text.