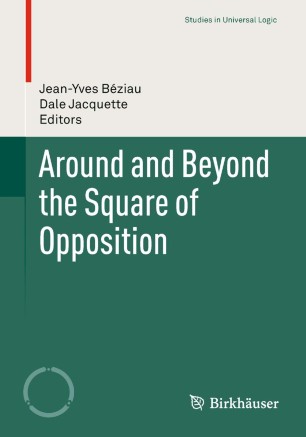 Around and Beyond the Square of Opposition

The theory of oppositions based on Aristotelian foundations of logic has been pictured in a striking square diagram which can be understood and applied in many different ways having repercussions in various fields: epistemology, linguistics, mathematics, sociology, physics. The square can also be generalized in other two-dimensional or multi-dimensional objects extending in breadth and depth the original Aristotelian theory.

The square of opposition is a very attractive theme which has been going through centuries without evaporating. Since 10 years there is a new growing interest for the square due to recent discoveries and challenging interpretations. This book presents a collection of previously unpublished papers by high level specialists of the square from all over the world.

Jean-Yves Beziau is Professor at the Federal University of Rio de Janeiro (UFRJ) and researcher of the Brazilian research council (CNPq). He has a PhD in philosopy and a PhD in mathematics. He has been working in France, Poland, Switzerland, Brazil and USA (Stanford and UCLA). He is Editor-in-Chief of the journal Logica Universalis. He has been working on the square of opposition since many years organizing world events on the subject.

Dale Jacquette is ordentlicher Professor für Philosophie, Abteilung Logik und theoretische Philosophie, Universität Bern, Switzerland. He studied philosophy at Oberlin College (AB 1975) and Brown University (MA 1981, PhD 1983), and has worked on a variety of formal logical and philosophical projects related especially to the concept of intentionality. His research on the square of opposition is a result of converging interests in Aristotle's philosophy, intensional predicate term logics, and historical precursors of contemporary logic.