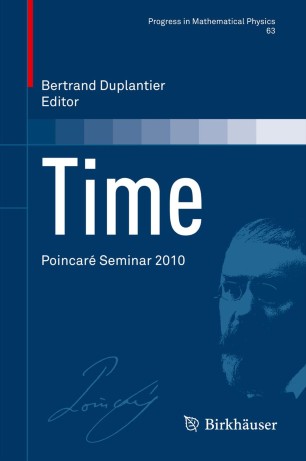 This eleventh volume in the Poincaré Seminar Series presents an interdisciplinary perspective on the concept of Time, which poses some of the most challenging questions in science. Five articles, written by the Fields medalist C. Villani, the two outstanding theoretical physicists T. Damour and C. Jarzynski, the leading experimentalist C. Salomon, and the famous philosopher of science H. Price, describe recent developments related to the mathematical, physical, experimental, and philosophical facets of this fascinating concept. These articles are also highly pedagogical, as befits their origin in lectures to a broad scientific audience. Highlights include a description of the manifold fundamental physical issues in play with time, in particular with the changes of perspective implied by Special and General Relativity; a mathematically precise discussion of irreversibility and entropy in the context of Boltzmann's and Vlasov's equations; a thorough survey of the recently developed “thermodynamics at the nanoscale,” the scale most relevant to biological physics; a description of the new cold atom space clock PHARAO to be installed in 2015 onboard the International Space Station, which will allow a test of Einstein's gravitational shift with a record precision of 2 × 10-6, and enable a test of the stability over time of the fundamental constants of physics, an issue first raised by Dirac in 1937; and last, but not least, a logical and clarifying philosophical discussion of ‘Time's arrow’, a phrase first coined by Eddington in 1928 in a challenge to physics to resolve the puzzle of the time-asymmetry of our universe, and echoed here in a short poème en prose by C. de Mitry.

This book should be of broad general interest to physicists, mathematicians, and philosophers.