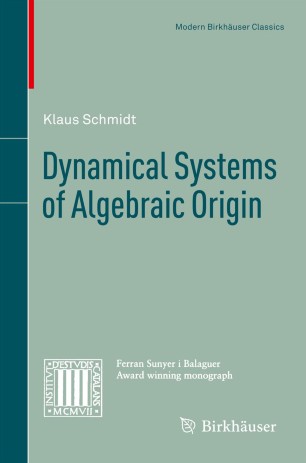 Although much of classical ergodic theory is concerned with single transformations and one-parameter flows, the subject inherits from statistical mechanics not only its name, but also an obligation to analyze spatially extended systems with multidimensional symmetry groups. However, the wealth of concrete and natural examples which has contributed so much to the appeal and development of classical dynamics, is noticeably absent in this more general theory. The purpose of this book is to help remedy this scarcity of explicit examples by introducing a class of continuous Zd-actions diverse enough to exhibit many of the new phenomena encountered in the transition from Z to Zd, but which nevertheless lends itself to systematic study: the Zd-actions by automorphisms of compact, abelian groups. One aspect of these actions, not surprising in itself but quite striking in its extent and depth nonetheless, is the connection with commutative algebra and arithmetical algebraic geometry. The algebraic framework resulting from this connection allows the construction of examples with a variety of specified dynamical properties, and by combining algebraic and dynamical tools one obtains a quite detailed understanding of this class of Zd-actions.

It is a marvelous display of the richness and depth of the interplay between dynamical systems on one hand and commutative algebra and number theory on the other. (...) This book is a very valuable addition to the literature on dynamical systems and ergodic theory.

This beautifully written monograph (...) is a very important addition to the literature, giving the first systematic account of the ergodic theory of algebraic Zd-actions. It will be of immense value to any researchers and graduate students interested in such multi-dimensional actions.