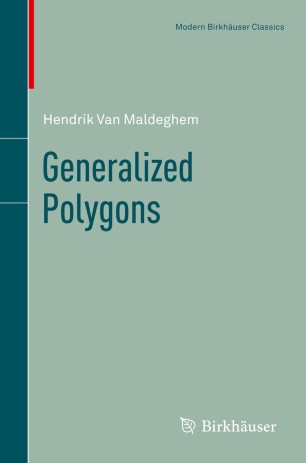 Generalized Polygons is the first book to cover, in a coherent manner, the theory of polygons from scratch. In particular, it fills elementary gaps in the literature and gives an up-to-date account of current research in this area, including most proofs, which are often unified and streamlined in comparison to the versions generally known.

Generalized Polygons will be welcomed both by the student seeking an introduction to the subject as well as the researcher who will value the work as a reference. In particular, it will be of great value for specialists working in the field of generalized polygons (which are, incidentally, the rank 2 Tits-buildings) or in fields directly related to Tits-buildings, incidence geometry and finite geometry.

The approach taken in the book is of geometric nature, but algebraic results are included and proven (in a geometric way!). A noteworthy feature is that the book unifies and generalizes notions, definitions and results that exist for quadrangles, hexagons, octagons - in the literature very often considered separately - to polygons. Many alternative in the book heighten the sense of beauty of the subject and help to provide further insight into the matter.

It is a complete introduction to generalized polygons and it is a reliable and extensive source for references on generalized polygons. (…) the theory is developed from scratch (…) All basic properties are given with proofs and the classical examples are discussed in detail. (…) The author is a leading expert on generalized polygons (…) besides original, elegant, geometric proofs by the author the book features also previously unpublished results by other authors. As a real jewel, material on Moufang polygons presented by Jacques Tits in lectures and seminars at the Collège de France is worked into the book.

Hendrik Van Maldeghem is a Professor of Mathematics at the Ghent University.