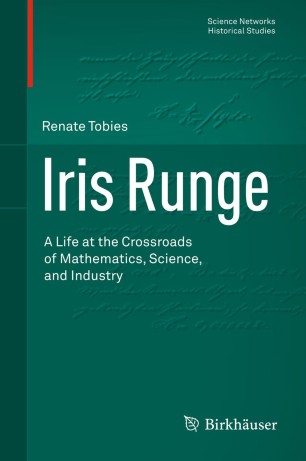 A Life at the Crossroads of Mathematics, Science, and Industry

This book concerns the origins of mathematical problem solving at the internationally active Osram and Telefunken Corporations during the golden years of broadcasting and electron tube research. The woman scientist Iris Runge, who received an interdisciplinary education at the University of Göttingen, was long employed as the sole mathematical authority at these companies in Berlin. It will be shown how mathematical connections were made between statistics and quality control, and between physical-chemical models and the actual problems of mass production. The organization of industrial laboratories, the relationship between theoretical and experimental work, and the role of mathematicians in these settings will also be explained. By investigating the social, economic, and political conditions that unfolded from the time of the German Empire until the end of the Second World War, the book hopes to build a bridge between specialized fields – mathematics and engineering – and the general culture of a particular era. It hopes, furthermore, to build a bridge between the history of science and industry, on the one hand, and the fields of Gender and Women’s Studies on the other. Finally, by examining the life and work of numerous industrial researchers, insight will be offered into the conditions that enabled a woman to achieve a prominent professional position during a time when women were typically excluded from the scientific workforce.