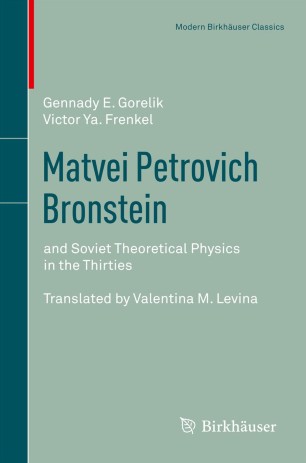 and Soviet Theoretical Physics in the Thirties

The short life and tragic death of Matvei Petrovich Bronstein (1906-1938) may be seen as a symbol of the man's time and his country. One of the most remarkable features of Soviet history was the impressive advance of its physical sciences against the brutal and violent background of totalitarianism. Soviet advances in nuclear and space technology form an important part of world history. These achievements had their roots in the 1930s, when Bronstein's generation entered science. Among his friends were the famous physicists Lev Landau and George Gamow.
Bronstein worked in the vast field of theoretical physics, ranging from nuclear physics to astrophysics and from relativistic quantum theory to cosmology. His pioneering work on quantizing gravitation goes beyond the history of physics, because today the quantum theory of gravitation occupies a special place in fundamental physics.
Bronstein was also a master of scientific explanation thanks to his profound knowledge, enthusiasm as a teacher and a gift for literature. This enabled him to write popular science for children, the widest and most responsive group of readers. He became a writer with the help of his wife Lidiya Chukovskaya, known now as an outstanding writer and fighter for human rights.
Bronstein's life was closely intertwined with the social, historical and scientific context of one of the most tragic and intriguing periods of Russian history.

Bronstein’s biography is well balanced between his personality, the institutional context, the scientific and ideological debates in the Soviet Union, and his scientific works. Most of all, the book gives interesting details on the politico-scientific context of the late 20ies and the 30ies.

The book includes much information about theoretical physics and the relation between science and society in the Soviet Union during the thirties.