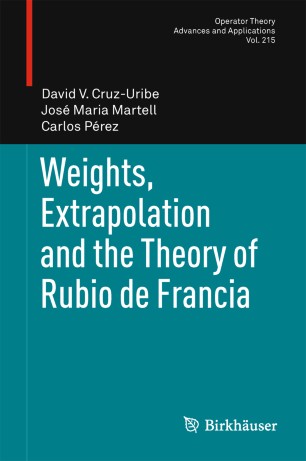 Weights, Extrapolation and the Theory of Rubio de Francia

This book provides a systematic development of the Rubio de Francia theory of extrapolation, its many generalizations and its applications to one and two-weight norm inequalities. The book is based upon a new and elementary proof of the classical extrapolation theorem that fully develops the power of the Rubio de Francia iteration algorithm. This technique allows us to give a unified presentation of the theory and to give important generalizations to Banach function spaces and to two-weight inequalities. We provide many applications to the classical operators of harmonic analysis to illustrate our approach, giving new and simpler proofs of known results and proving new theorems. The book is intended for advanced graduate students and researchers in the area of weighted norm inequalities, as well as for mathematicians who want to apply extrapolation to other areas such as partial differential equations.

The book is written with care and it will be attractive to readers with different interests. In particular, the short but general overview on weighted norm inequalities and extrapolation given in Chapter 1 should be appealing to a broad audience, and many analysts will find valuable the part dealing with one-weighted inequalities, while the necessarily more technical presentation of the two-weight theory demands better preparation from the reader.

“This book presents some recent aspects of weighted norm inequalities, in particular, it deals with generalizations and applications of the extrapolation theorem of Rubio de Francia. It is well-written and its contents are well-organized. … it is useful … not only for researchers and students who are working on weighted norm inequalities but also for mathematicians working in other areas of harmonic analysis.” (Yasuo Komori, Zentralblatt MATH, Vol. 1234, 2012)