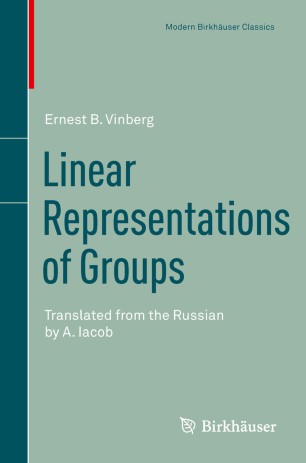 Translated from the Russian by A. Iacob

This book is a short modern introduction to representation theory of groups. (…) Basic examples and exercises enable the reader to change over to explicit calculations.

This is a short and very readable introduction to finite-dimensional representation theory. A preliminary chapter gives the general flavor of the theory describing many examples and emphasizing the “harmonic analysis” aspects. (…) There are many exercises in the text; at the end of the book there is a list of some answers and solutions. (…) Even though the book is very short, its exposition is clear and unhurried. By concentrating on essential matters the author succeeds in getting across many of the fundamental ideas of the theory.

Ernest B. Vinberg is a Professor of mathematics at the Moscow University.

“Vinberg’s book should be seen as preliminary to far more ambitious and weighty texts … . It takes the reader from raw basics, done very nicely, through the obligatory discussion of the regular representation … to some excellent stuff on SU2 and SO3, with a discussion of Laplace’s spherical functions thrown in. The presence of a huge number of guiding examples is a major asset … as is the large collection of exercises for the reader. It is indeed a marvelous introduction to representation theory!” (Michael Berg, The Mathematical Association of America, February, 2011)