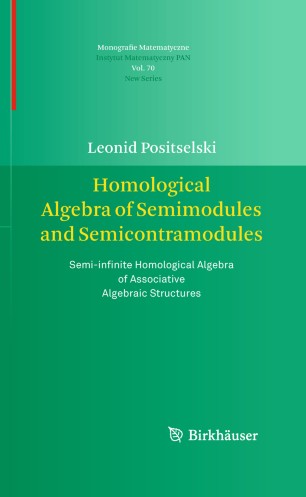 This monograph deals with semi-infinite homological algebra. Intended as the definitive treatment of the subject of semi-infinite homology and cohomology of associative algebraic structures, it also contains material on the semi-infinite (co)homology of Lie algebras and topological groups, the derived comodule-contramodule correspondence, its application to the duality between representations of infinite-dimensional Lie algebras with complementary central charges, and relative non-homogeneous Koszul duality. The book explains with great clarity what the associative version of semi-infinite cohomology is, why it exists, and for what kind of objects it is defined. Semialgebras, contramodules, exotic derived categories, Tate Lie algebras, algebraic Harish-Chandra pairs, and locally compact totally disconnected topological groups all interplay in the theories developed in this monograph. Contramodules, introduced originally by Eilenberg and Moore in the 1960s but almost forgotten for four decades, are featured prominently in this book, with many versions of them introduced and discussed. Rich in new ideas on homological algebra and the theory of corings and their analogues, this book also makes a contribution to the foundational aspects of representation theory. In particular, it will be a valuable addition to the algebraic literature available to mathematical physicists.

“The book is written for experts in several areas such as homological algebra, representation theory of Lie algebras and Hopf algebras. The theoretical results are proven with enough detail and with an eye towards specific applications in mind. … give an excellent overview of the whole book and its connections with the relevant results in the literature.” (Atabey Kaygun, Mathematical Reviews, Issue 2012 c)
Buy options