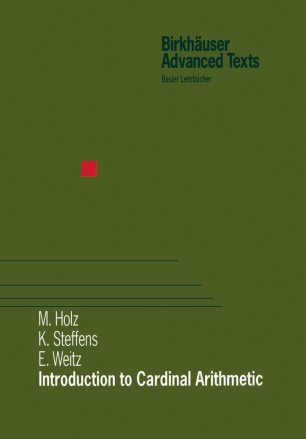 This book is an introduction to modern cardinal arithmetic, developed in the frame of the axioms of Zermelo-Fraenkel set theory together with the axiom of choice. It splits into three parts. Part one, which is contained in Chapter 1, describes the classical cardinal arithmetic due to Bernstein, Cantor, Hausdorff, Konig, and Tarski. The results were found in the years between 1870 and 1930. Part two, which is Chapter 2, characterizes the development of cardinal arith­ metic in the seventies, which was led by Galvin, Hajnal, and Silver. The third part, contained in Chapters 3 to 9, presents the fundamental investigations in pcf-theory which has been developed by S. Shelah to answer the questions left open in the seventies. All theorems presented in Chapter 3 and Chapters 5 to 9 are due to Shelah, unless otherwise stated. We are greatly indebted to all those set theorists whose work we have tried to expound. Concerning the literature we owe very much to S. Shelah's book [Sh5] and to the article by M. R. Burke and M. Magidor [BM] which also initiated our students' interest for Shelah's pcf-theory.