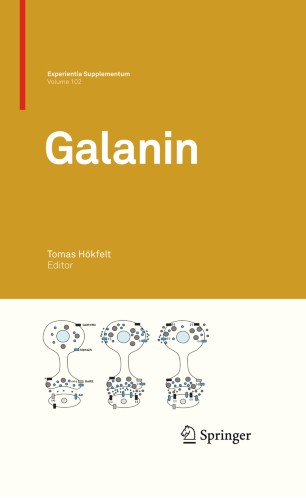 Galanin is a neuropeptide found both in the central and peripheral nervous system. The 29-amino acid peptide (named after its N-terminal glycine and C-terminal alanine) was identified in 1983 by its C-terminal amidation. This 'reverse' approach, that is to discover a substance through a distinct chemical feature, and only subsequently to characterize its biological activity, was novel and has been successful in the identification of several other peptides. After the structure of galanin was determined in 1983, functional studies were performed with material purified from natural sources until the synthetic form of the peptide became available. Galanin can act as transmitter, modulator and trophic factor, and is involved in a number of physiological processes such as hormone secretion, cardiovascular mechanisms, feeding and cognition. This peptide may also be of significance for a number of pathological processes/disorders including pain, depression, Alzheimer's disease, epilepsy, addiction and cancer. This wide diversity of actions is mediated by three galanin receptor subtypes. The studies reviewed in this volume give a fairly complete overview of the spectrum of the biological actions and functions of galanin and its receptors and on possible therapeutic applications in a number of pathological conditions.