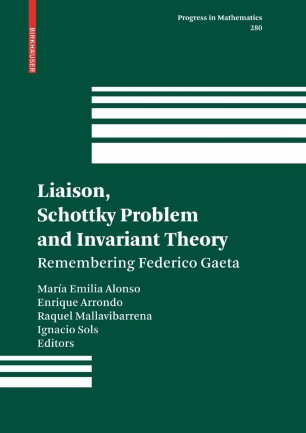 Part of the Progress in Mathematics book series (PM, volume 280)

Federico Gaeta (1923–2007) was a Spanish algebraic geometer who was a student of Severi. He is considered to be one of the founders of linkage theory, on which he published several key papers. After many years abroad he came back to Spain in the 1980s. He spent his last period as a professor at Universidad Complutense de Madrid. In gratitude to him, some of his personal and mathematically close persons during this last station, all of whom bene?ted in one way or another by his ins- ration, have joined to edit this volume to keep his memory alive. We o?er in it surveys and original articles on the three main subjects of Gaeta’s interest through his mathematical life. The volume opens with a personal semblance by Ignacio Sols and a historical presentation by Ciro Ciliberto of Gaeta’s Italian period. Then it is divided into three parts, each of them devoted to a speci?c subject studied by Gaeta and coordinated by one of the editors. For each part, we had the advice of another colleague of Federico linked to that particular subject, who also contributed with a short survey. The ?rst part, coordinated by E. Arrondo with the advice of R.M.