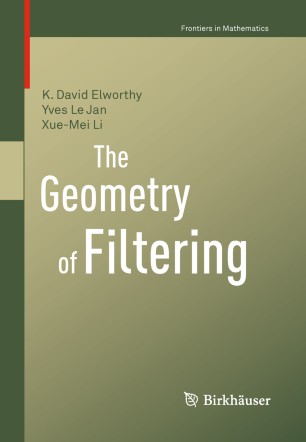 The Geometry of Filtering

Filtering is the science of nding the law of a process given a partial observation of it. The main objects we study here are di usion processes. These are naturally associated with second-order linear di erential operators which are semi-elliptic and so introduce a possibly degenerate Riemannian structure on the state space. In fact, much of what we discuss is simply about two such operators intertwined by a smooth map, the \projection from the state space to the observations space", and does not involve any stochastic analysis. From the point of view of stochastic processes, our purpose is to present and to study the underlying geometric structure which allows us to perform the ltering in a Markovian framework with the resulting conditional law being that of a Markov process which is time inhomogeneous in general. This geometry is determined by the symbol of the operator on the state space which projects to a symbol on the observation space. The projectible symbol induces a (possibly non-linear and partially de ned) connection which lifts the observation process to the state space and gives a decomposition of the operator on the state space and of the noise. As is standard we can recover the classical ltering theory in which the observations are not usually Markovian by application of the Girsanov- Maruyama-Cameron-Martin Theorem. This structure we have is examined in relation to a number of geometrical topics.