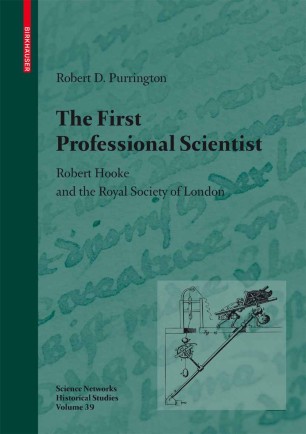 Robert Hooke and the Royal Society of London

A contemporary of Christopher Wren, Robert Boyle, and Isaac Newton, and close friend of all but Newton, Robert Hooke (1635-1703), one of the founders of the early scientific revolution, faded into almost complete obscurity after his death and remained there for nearly three centuries. The result has been that his role in the scientific revolution has been almost totally ignored. He was best known as the first professional scientist worthy of the name, working for the young Royal Society of London as its curator of experiments for four decades. He became the Society’s intellectual center, and for a while its Secretary, roles which led to his famous confrontation with Newton.

Hooke was an amazingly diverse scientist, interested in pneumatics, magnetism, astronomy, mechanics, horology, optics, microscopy, gravity, and changes in the earth. His Micrographia, published in 1665, is one of the classics of the literature of early modern science. In addition he has a more practical career in surveying, construction, and architecture, and was second in importance only to Christopher Wren in the rebuilding of London after the Great Fire of 1666. Many of the so-called "Wren churches" are Hooke designs. A unique aspect of this book is the emphasis on the way Hooke provided Newton with the key to understanding planetary dynamics, paving the way for the discoveries that made Newton one of the greatest scientists of all time.

“Each chapter is abundantly annotated. These annotations do more than just give a source: they are often quite descriptive in themselves. … This book describes the life of Hooke as well as his scientific contributions. Reading this book will enable one to see Hooke as the eclectic gentleman that he was. Anyone interested in Hooke or the London scientific community of the 17th century will certainly enjoy perusing it.” (Herbert E. Kasube, The Mathematical Association of America, August, 2010)
Buy options