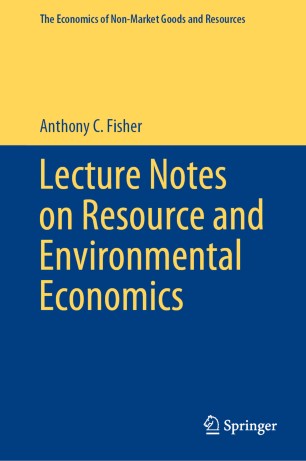 Part of the The Economics of Non-Market Goods and Resources book series (ENGO, volume 16)

This book, based on lectures on natural and environmental resource economics, offers a nontechnical exposition of the modern theory of sustainability in the presence of resource scarcity. It applies an alternative take on environmental economics, focusing on the economics of the natural environment, including development, computation, and potential empirical importance of the concept of option value, as opposed to the standard treatment of the economics of pollution control. The approach throughout is primarily conceptual and theoretical, though empirical estimation and results are sometimes noted. Mathematics, ranging from elementary calculus to more formal dynamic optimization, is used, especially in the early chapters on the optimal management of exhaustible and renewable resources, but results are always given an economic interpretation. Diagrams and numerical examples are also used extensively.

The first chapter introduces the classical economists as the first resource economists, in their discussion of the implications of a limited natural resource base (agricultural land) for the evolution of the wider economy. A later chapter returns to the same concerns, along with others stimulated by the energy and environmental “crises” of the 1970s and beyond. One section considers alternative measures of resource scarcity and empirical findings on their behavior over time. Another introduces the modern concept of sustainability with an intuitive development of the analytics. A chapter on the dynamics of environmental management motivates the concept of option value, shows how to compute it, then demonstrates its importance in an illustrative empirical example. The closing chapter, on climate change, first projects future changes and potential catastrophic impacts, then discusses the policy relevance of both option value and discounting for the very long run.

This book is intended for resource and environmental economists and can be read by interested graduate and advanced undergraduate students in the field as well.

Anthony C. Fisher is Professor Emeritus in the Department of Agricultural and Resource Economics at the University of California at Berkeley, where he has researched, taught, and consulted in the field of environmental and resource economics since 1977. His areas of specialization have included the theory and practice of environmental resource valuation, theory of exhaustible resource extraction and exploration, energy/economy modeling, and the allocation of ground and surface water, especially under drought conditions. His recent research focuses primarily on aspects of the economics of climate change.