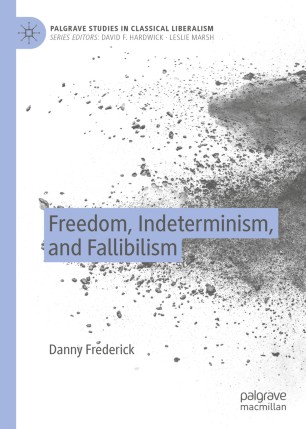 This book uses the concepts of freedom, indeterminism, and fallibilism to solve, in a unified way, problems of free will, knowledge, reasoning, rationality, personhood, ethics and politics. Presenting an overarching theory of human freedom, Frederick argues for an account of free will as the capacity for undetermined acts. Knowledge, rationality, and reasoning, both theoretical and practical, as well as personhood, morality and political authority, are all shown to be dependent at their roots on indeterminism and fallibility, and to be connected to individual freedom. Thought-provoking and original, Frederick’s theory of freedom examines a broad spectrum of issues, from the distinction between persons and other animals, to the purpose of the state and political authority. Offering a bold and succinct conspectus of the philosophy of freedom, this book makes surprising connections between perennial issues across the field of philosophy.
Danny Frederick is an independent scholar who has published over forty philosophical articles in academic journals, including: International Journal for the Study of Skepticism; Politics, Philosophy & Economics; International Journal for Philosophy of Religion; Canadian Journal of Philosophy; Dialectica; Philosophical Forum; Journal of Moral Philosophy; Philosophical Quarterly; Journal of Value Inquiry.