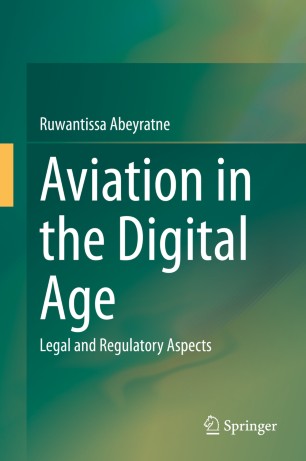 Aviation in the Digital Age

All of the topics discussed in this book – from sovereignty to cybercrime, and from drones to the identification of passengers & privacy – are profoundly affected by algorithms; so are air traffic services and aeronautical communications. All of these aviation-related aspects are addressed in a 75-year-old treaty called the Chicago Convention and its Annexes, which, as this book argues, needs to be reviewed with a focus on its relevance and applicability in connection with Moore’s Law, which posits that transistors in computer microchips double in speed, power and performance every two years, while the cost of computers is halved during the same period.
Firstly, in terms of traditional territorial sovereignty, we have arrived at a point where there is a concept of data sovereignty and ownership that raises issues of privacy. Data transmission becomes ambivalent in terms of territorial sovereignty, and the Westphalian model may not be the perfect answer. Whether it be the manufacture of airplanes, the transfer of data on individuals, or the transmission of aeronautical and telecommunications information – all have to be carried out in accordance with the same fundamental principle: duty of care. Against the backdrop of the relevant provisions of the Chicago Convention and its Annexes, the detailed analysis presented here covers key areas such as: megatrends; AI and international law in the digital age; blockchain and aviation; drones; aviation and telecommunications; aviation and the Internet; cybersecurity; and digital identification of passengers & privacy. In turn, the book suggests how we can best manage this transition.

Dr. Ruwantissa Abeyratne has worked in the field of aviation law and management for more than 35 years. He is currently Senior Associate, Air Law and Policy at Aviation Strategies International in Montreal.At retirement from the International Civil Aviation Organization after 23 years of service at various senior positions in air transport and air law, Dr. Abeyratne was Coordinator, Air transport Programmes as well as Senior Legal Officer, heading the Treaty Office of ICAO. He also advised States on their registration and depository obligations with regard to international treaties and their adherence thereto and was General Counsel for ICAO staff members. Prior to his service at ICAO, Dr. Abeyratne was, for 8 years at Airlanka, serving the airline as Chief Coordinator and Head of International Relations and Insurance. Dr. Abeyratne, holds the degree of doctor of civil laws (DCL) from McGill University, the degree of doctor of philosophy (PhD) from the University of Colombo, the degree of master of laws (LL.M) from Monash University, Victoria, Australia, and the degree of bachelor of laws (LL.B) from the University of Colombo