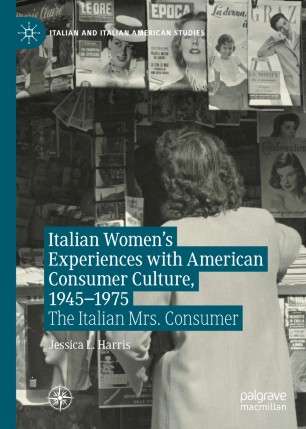 This book analyzes the spread of American female consumer culture to Italy and its influence on Italian women in the postwar and Cold War periods, eras marked by the political, economic, social, and cultural battle between the United States and Soviet Union. Focusing on various aspects of this culture—beauty and hygiene products, refrigerators, and department stores, as well as shopping and magazine models—the book examines the reasons for and the methods of American female consumer culture’s arrival in Italy, the democratic, consumer capitalist messages its products sought to “sell” to Italian women, and how Italian women themselves reacted to this new cultural presence in their everyday lives. Did Italian women become the American Mrs. Consumer? As such, the book illustrates how the modern, consuming American woman became a significant figure not only in Italy’s postwar recovery and transformation, but also in the international and domestic cultural and social contests for the hearts and minds of Italian women.

Jessica L. Harris is currently Visiting Assistant Professor in the History Department of Allegheny College, USA, and will be joining St. John's University as Assistant Professor of History. She is a scholar of Modern Italy, Black Europe, 20th century U.S. and the World, and African American History. Jessica has held fellowships at the University of Toronto, Canada and Oxford University, UK. Her work has appeared in Modern Italy, Imago. Studi di cinema e media, and Carte Italiane.