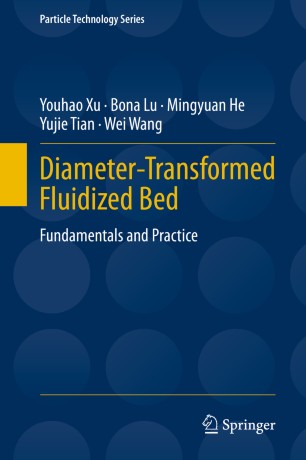 This book puts forward the concept of the Diameter-Transformed Fluidized Bed (DTFB): a fluidized bed characterized by the coexistence of multiple flow regimes and reaction zones, achieved by transforming the bed into several sections of different diameters. It reviews fundamental aspects, including computational fluid dynamics simulations and industrial practices in connection with DTFB. In particular, it highlights an example concerning the development of maximizing iso-paraffins (MIP) reactors for regulating complex, fluid catalytic cracking reactions in petroleum refineries. The book is a must-have for understanding how academic and industrial researchers are now collaborating in order to develop novel catalytic processes.

Youhao Xu received his BSc in 1985 and MSc in 1988 from East China University of Science and Technology. Thereafter, he received a PhD in 2006 from the Research Institute of Petroleum Processing (RIPP) of Sinopec. Currently, he is a Chief Scientist at Sinopec in the field of petroleum refining. He has over 30 years’ experience in research and development in fluid catalytic cracking (FCC) processes and invented the diameter-transformed fluidised bed reactor. He has enabled effective regulation of complex gas-solid catalytic reactions by establishing the fluidised bed reactor platform and by recognising the coexistence of multiple temperature zones and multiple flow regimes in a single reactor. Based on this platform, several technologies have been developed such as high heavy hydrocarbon utilisation, clean gasoline production and light olefin production. He proposed the concept of two reaction zones for cracking and conversion reactions (i.e., isomerisation and hydrogen transfer), and thus invented the MIP (maximising iso-paraffins) process. He correlated coke yield and conversion, and thereafter developed a catalytic cracking-hydrogenation integrated process for the highly effective conversion of heavy hydrocarbons. The above processes have been applied in 115 commercial units with an annual capacity totalling 154 million tons, accounting for 81% of all FCC units in China and providing 57% of gasoline for Chinese vehicles. Currently, 84% of FCC units in Sinopec facilities utilise the diameter-transformed fluidised bed reactor.

Bona Lu received her BSc in 2003 from Zhejiang University and a PhD in 2010 from the University of Chinese Academy of Sciences, both in Chemical Engineering. In 2013, She became an Associate Professor of Chemical Engineering at the Institute of Process Engineering (IPE), Chinese Academy of Sciences (CAS). She has published approximately 40 peer-reviewed articles and three books (or book chapters), and has led in excess of 10 projects supported by Sinopec, CNPC, Alstom, CHN Energy, NSFC and CAS. She serves as one of the “Young Corresponding Experts of Engineering” and as an assistant editor of Particuology, and was recognised as a “Most Cited Author” of Chemical Engineering Science and as an “Excellent Young Scholar” of IPE. In 2015, She was selected as a member of the Youth Innovation Promotion Association of CAS. Her research interests include the meso-scale modelling and simulation of multiphase reacting flow, dynamic methods of catalytic kinetics, and process intensification, in particular for fluidised bed chemical processes such as fluid catalytic cracking, coal/biomass pyrolysis/gasification and methanol-to-olefins processes. She proposed coarse-grid simulation methods by quantifying the dynamic mesoscale/sub-grid structures, and thus has optimised various industrial chemical reactors including the MIP (maximising iso-paraffins process) reactor in collaboration with Sinopec since 2005.

Mingyuan He is the Vice Chairman of Academic Committee, at RIPP, Sinopec and the director of Shanghai Key Laboratory for Green Chemistry and Chemical Processes, East China Normal University.

Mingyuan He has made technological innovations in the field of catalytic materials for refining and petrochemicals production. He holds in excess of 200 Chinese or international patents relating to a number of zeolite syntheses and modification methods with several series of refining catalysts having been developed and commercially applied. A major achievement of Prof. He was being elected as one of the “Nation’s Top Ten Scientific and Technological Achievements” in 1996. Furthermore, He has been the recipient of numerous national awards such as the Invention Awards, Scientific and Technological Progress Awards, Outstanding Chinese Patent Awards, and Sinopec Invention Awards. He was Co-Chair of the 15th International Zeolite Association (IZA) conference, and in 2007, was elected to Vice President of the IZA. He was appointed as Principal Scientist for the State Key Basic Research Program in the field of green chemistry. Additionally, He has received the Science and Technology Award from the Ho Leung Ho Li Foundation, Hong Kong, in 2001, and the Catalysis Achievement Award from the Chinese Chemical Society in 2011. In 2012, He was awarded the “Cavalier Medal of Palm Leaf” by the French Ministry of Education, and the “Catalysis Achievement Award of China”, granted by the Chinese Chemical Society. He was elected as a member of the Chinese Academy of Sciences in 1995 and was bestowed the diploma of Doctor Honoris Causa from Ecole Normale Superieur de Lyon, France, in 2016.

Yujie Tian received his BSc. in 2013 from Central South University, majoring in metallurgy engineering, and his PhD in 2019 from the University of Chinese Academy of Sciences, majoring in chemical engineering. His research interests relate to the multiscale modelling of gas-solid flows. He proposed a universal multiscale drag model based on the energy-minimisation multiscale (EMMS) approach. The universal drag model has been validated over a wide range of fluidisation regimes, and used to investigate the regime transition of gas-solid fluidised beds. Furthermore, He analysed the underlying mechanism of the EMMS model from the perspective of nonequilibrium thermodynamics. He derived a structure-dependent entropy production model for gas-solid fluidised beds on the basis of a structure-dependent multi-fluid model. The applicability of the entropy production extremum principles for predicting the statistical behaviour of gas-solid fluidised beds has been explored. Currently, He is an Assistant Professor working at the Institute of Process Engineering, CAS.

Wei Wang received his BSc in 1994 and MSc in 1997 from Sichuan University and a PhD in 2002 from the University of Chinese Academy of Sciences, all in Chemical Engineering. In 2008, he became a full Professor at the Institute of Process Engineering, CAS. His research interests focus on multiscale modelling and computational fluid dynamics (CFD) for multiphase flow systems. He proposed the structure-dependent multi-fluid (SFM) model based on meso-scale structures that enables heterogeneous multiphase flows to be correctly predicted even with coarse-grid resolutions. Furthermore, he established the multiscale CFD method and further extended the model from hydrodynamics to reactive flows. In collaboration with organisations including Sinopec, PetroChina, and Alstom, his model has been applied successfully for the troubleshooting/design of numerous industrial processes such as MIP/FCC, coal gasification and combustion and polyethylene polymerisation. He has authored/co-authored over 80 papers and seven books (chapters), including, e.g., “From Multiscale Modelling to Meso-Science: A Chemical Engineering Perspective”, third author, Springer, 2013; two review chapters on meso-scale modelling in “Advances in Chemical Engineering”, Elsevier, 2011, 2015; and one chapter in “Handbook of Combustion”, Wiley-VCH, 2010. Currently, he serves as the executive editor for Particuology, Elsevier and the deputy director of the State Key Laboratory of Multiphase Complex Systems, China.