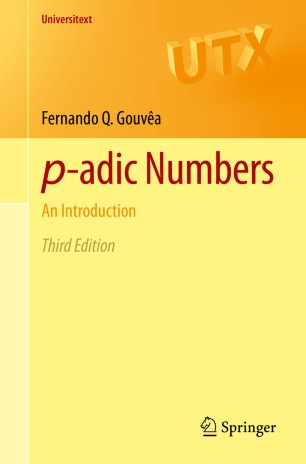 There are numbers of all kinds: rational, real, complex, p-adic, and more. The p-adic numbers are not as well known as the others, but they play a fundamental role in number theory and in other parts of mathematics, capturing information related to a chosen prime number p. They also allow us to use methods from calculus and analysis to obtain results in algebra and number theory.

This book is an elementary introduction to p-adic numbers. Most other books on the subject are written for more advanced students; this book provides an entryway to the subject for students with an undergraduate mathematics education. Readers who want to have an idea of and appreciation for the subject will probably find what they need in this book. Readers on the way to becoming experts can begin here before moving on to more advanced texts.

This third edition has been thoroughly revised to correct mistakes, make the exposition clearer, and call attention to significant aspects that are usually reserved for advanced books. The most important addition is the integration of mathematical software for computations with p-adic numbers and functions. A final chapter includes a selection of problems for further exploration.

From the reviews of the first and second editions:

"Perhaps the most suitable text for beginners" - The Mathematical Gazette

"This text perfectly fulfills what it proposes" - Mathematical Reviews

"If I had to recommend one book on the subject to a student – or even to a fully grown mathematician ...– it would still be this book" - MAA Reviews

Fernando Q. Gouvêa is a number theorist and historian of mathematics. In number theory he has been interested in the connection between p-adic modular forms and deformations of Galois representations. As a historian his main focus is on the early history of algebraic number theory, but he has also written on other historical topics. He enjoys books and has written many book reviews for a wide range of publications. For many years he served as editor of MAA Focus and of MAA Reviews. His current project is a forthcoming book on the history of p-adic numbers and p-adic analysis in the first decades of the twentieth century. Gouvêa’s other books include Arithmetic of p-adic Modular Forms, A Guide to Groups, Rings, and Fields, and (with William P. Berlinghoff) Math through the Ages: A Gentle History for Teachers and Others.