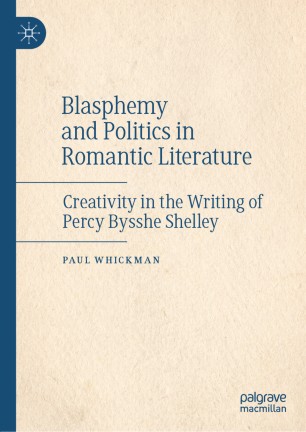 Blasphemy and Politics in Romantic Literature

Creativity in the Writing of Percy Bysshe Shelley

This book argues for the importance of blasphemy in shaping the literature and readership of Percy Bysshe Shelley and of the Romantic period more broadly. Not only are perceptions of blasphemy taken to be inextricable from politics, this book also argues for blasphemous ‘irreverence’ as both inspiring and necessitating new poetic creativity. The book reveals the intersection of blasphemy, censorship and literary property throughout the ‘Long Eighteenth Century’, attesting to the effect of this connection on Shelley’s poetry more specifically. Paul Whickman notes how Shelley’s perceived blasphemy determined the nature and readership of his published works through censorship and literary piracy. Simultaneously, Whickman crucially shows that aesthetics, content and the printed form of the physical text are interconnected and that Shelley’s political and philosophical views manifest themselves in his writing both formally and thematically.

Paul Whickman is Senior Lecturer in English at the University of Derby, UK. Paul’s research interests lie in the Romantic period, particularly the work of Byron, Shelley and Keats. He has published in journals such as the Keats-Shelley Review and was previously a contributor to the Year’s Work in English Studies (2015-2018).

“Paul Whickman shows us how Percy Shelley exploited perceived political and religious ‘blasphemy’ to energise his poetry, deliberately exiling himself from the literary mainstream even as he reshaped and revitalized it. To ‘canonize’ Shelley, Whickman argues, is to diminish all that his desecrating genius achieved in poems such as ‘Mont Blanc’, Laon and Cythna and Prometheus Unbound. All scholars of Romanticism should read this brilliant new account of how Shelley’s sacrilege created our greatest unacknowledged legislator.” (Nicholas Roe, Wardlaw Professor of English, University of St Andrews, UK)

“Paul Whickman’s valuable study opens up insightful new ways of considering the slippery relationship between blasphemy and politics in the Romantic period. Focusing on Percy Bysshe Shelley, Whickman reveals the value of situating him within a broader context and how Shelley’s poetry responded to the intersection of political and religious power.” (Madeleine Callaghan, Senior Lecturer in English, University of Sheffield, UK)

“Paul Whickman’s book is a deft and timely reassessment of the centrality of blasphemy to Shelley’s politics and poetry. It also demonstrates how notions of Shelleyan irreverence had a powerful effect on his reception by both contemporaries and later readers. This fresh and lively account of Shelley’s complex relationship to wider cultural, intellectual and legislative contexts and imperatives breaks important new ground and will be invaluable for all scholars of the Romantic period.” (Lynda Pratt, Professor of Romanticism, University of Nottingham, UK)
Buy options