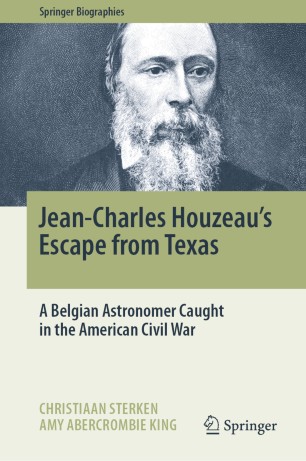 A Belgian Astronomer Caught in the American Civil War

Translated from the original French and annotated with figures, historical maps and commentary from the translators, this work is Jean-Charles Houzeau's account of his escape from Texas during the American Civil War. Houzeau was a Belgian astronomer who worked a couple of years as assistant astronomer at the Brussels Observatory, but eventually moved to the United States. He was living as a frontierman in Texas when the Civil War broke out, and because he took an abolitionist stance and helped slaves escape, he was forced to flee to Mexico, from where he sailed to New Orleans on board of a US military vessel. Originally titled La terreur blanche au Texas et mon 'evasion, Houzeau captured the details of his escape in 1862. The editors, an astronomer and a French language  teacher, have added supplementary material to give the readers more depth and historical context to the story.

Amy Abercrombie King has a Bachelor of Arts degree in government from the University of Texas at Austin and a Bachelor of Arts degree in French from The University of Texas at San Antonio. She holds a lifetime certification as a secondary school teacher in Texas, with certifications in French, English, English as Second Language (ESL), Social Studies and  Information Technology. She was awarded Fulbright-Hays and American Association of Teachers of French scholarships to study the French language and culture, completing postgraduate programs at Université  Laval and Université  de Montréal. She also studied French language, culture, and teaching methods in Cameroon, Africa. A fifth-generation Texan, she was born in Victoria, Texas and grew up in Uvalde, near Fort Clark. She currently resides in San Antonio, and has recently retired from teaching French at Douglas MacArthur High School.

“This book is extremely well documented and written in a very clear and concise way. … I strongly recommend this book to people interested in history of astronomy, but also to historians who find some interest in the US Civil War and, in a more general way, in the history of the United States.” (Emile Biémont, Journal of Astronomical History and Heritage, Vol. 23 (2), 2020)