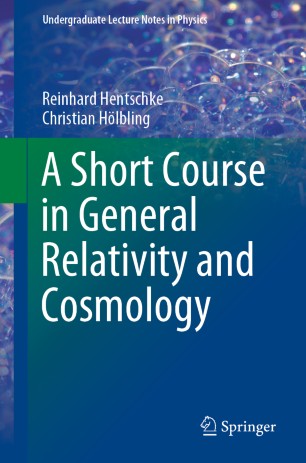 A Short Course in General Relativity and Cosmology

Unlike most traditional introductory textbooks on relativity and cosmology that answer questions like “Does accelerated expansion pull our bodies apart?”, “Does the presence of dark matter affect the classical tests of general relativity?” in a qualitative manner, the present text is intended as a foundation, enabling students to read and understand the textbooks and many of the scientific papers on the subject. And, above all, the readers are taught and encouraged to do their own calculations, check the numbers and answer the above and other questions regarding the most exciting discoveries and theoretical developments in general relativistic cosmology, which have occurred since the early 1980s. In comparison to these intellectual benefits the text is short. In fact, its brevity without neglect of scope or mathematical accessibility of key points is rather unique. The authors connect the necessary mathematical concepts and their reward, i.e. the understanding of an important piece of modern physics, along the shortest path.

The unavoidable mathematical concepts and tools are presented in as straightforward manner as possible. Even though the mathematics is not very difficult, it certainly is beneficial to know some statistical thermodynamics as well as some quantum mechanics. Thus the text is suitable for the upper undergraduate curriculum.

Reinhard Hentschke studied physics at the University of Osnabrück in Germany and received a PhD from the University of Maine. After a stay as a visiting scientist in the Department of Chemistry at Cornell University, he worked as a postdoc in the Department of Chemistry at Brandeis University.  Subsequently he joined the Max-Planck Institute for Polymer Research as a staff scientist. Following his Habilitation in physical chemistry at the  Johannes Gutenberg University in Mainz, Germany, he moved to Wuppertal, where he is a professor of physics. His research interests have frequently straddled the boundary between physics and chemis­try.

Christian Hoelbling studied physics at the university of Graz, Austria. He received his PhD from Boston University in 2002, with a thesis entitled “Monopoles, confinement and chiral symmetry in lattice gauge theory”. After postdocs at DESY and the CNRS, Marseille, he joined the University of Wuppertal where he obtained his Habilitation in 2013 and is currently a senior researcher. His main research interest is in computational quantum field theory and its application towards the search of new physics.