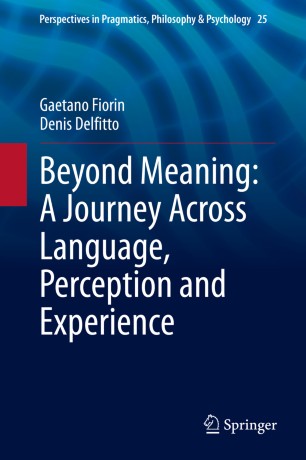 Beyond Meaning: A Journey Across Language, Perception and Experience

Natural languages – idioms such as English and Cantonese, Zulu and Amharic, Basque and Nicaraguan Sign Language – allow their speakers to convey meaning and transmit meaning to one another. But what is meaning exactly? What is this thing that words convey and speakers communicate? Few questions are as elusive as this. Yet, few features are as essential to who we are and what we do as human beings as the capacity to convey meaning through language.
In this book, Gaetano Fiorin and Denis Delfitto disclose a notion of linguistic meaning that is structured around three distinct, yet interconnected dimensions: a linguistic dimension, relating meaning to the linguistic forms that convey it; a material dimension, relating meaning to the material and social conditions of its environment; and a psychological dimension, relating meaning to the cognitive lives of its users.
By paying special attention to the puzzle surrounding first-person reference – the way speakers exploit language to refer to themselves – and by capitalizing on a number of recent findings in the cognitive sciences, Fiorin and Delfitto develop the original hypothesis that meaningful language shares the same underlying logical and metaphysical structure of sense perception, effectively acting as a system of classification and discrimination at the interface between cognitive agents and their ecologies.

Gaetano Fiorin is Assistant Professor of Linguistics and Logic at University College Utrecht and a researcher affiliated to the Utrecht institute of Linguistics (UiL-OTS). He graduated with a thesis on the semantic competence of children with developmental dyslexia. His research work spans from theoretical linguistics – particularly the semantics of the first-person and its implications for the syntax-semantics interface and the metaphysics of meaning – to experimental linguistics – particularly developmental dyslexia and multilingualism.
Denis Delfitto is Professor of Linguistics at the University of Verona. He graduated at the Scuola Normale in Pisa and had many research and teaching experiences in a number of American and European universities. His publications – in international scientific journals and peer-reviewed volumes – span from the syntax of reference and quantification in natural language – including issues of comparative syntax and semantics – to issues of language change and language impairment. His core interest is the investigation of the human capacity for language from a broad cognitive and philosophical perspective.