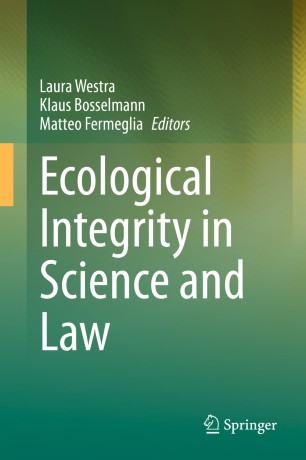 Ecological Integrity in Science and Law

This book offers recent insights into some of the burning issues of our times: climate change, exposure to chemicals, refugee issues and the ecological harm that accompanies conflict situations. It brings together a group of pioneering scholars, mostly legal experts but also thinkers from various scientific disciplines, to discuss concerns from around the globe – from Australia and New Zealand, to Canada and the United States, European countries including Germany, Italy, Britain and the Czech Republic, as well as the African continent.

Presenting the latest climate and ecology-related case law, as well as analyses of the conceptual issues that underlie international problems, it covers the extinction of species, the basic role of women and Indigenous peoples in protecting the environment, the failure of today’s states to protect the human right to a safe environment and public health, the harm arising from the current industrial food production, and the problems resulting from a growth-oriented economy. Lastly, the book examines various international legal principles and regulations that have been proposed to defend global ecological rights.

Klaus Bosselmann has been teaching in the areas of public international law, European law, global environmental law and governance, and environmental constitutionalism. His research focus is on conceptual, international and comparative dimensions of environmental law and governance. He is particularly interested in ecological approaches to law and governance. He has been the Director of the New Zealand Centre for Environmental Law since its establishment in 1999. He is Chair of the IUCN World Commission on Environmental Law (WCEL) Ethics Specalist Group, Chair of the Steering Committee of the Ecological Law and Governance Association (ELGA),  Co-Chair of the Global Ecological Integrity Group (GEIG), and executive member of several other professional networks including Sustainable Aotearoa New Zealand (SANZ) and the New Zealand Centre of Global Studies (NZCGS). Klaus has authored or edited 30 books on environmental law and political ecology, a number of which have been translated into multiple languages; his articles appeared in many of the world’s leading law journals. For his pioneering work on ecological law, he has received numerous awards including the Inaugural Senior Scholarship Prize of the IUCN Academy of Environmental Law.
Matteo Fermeglia is affiliated as a Doctor Assistant in Environmental and Administrative Law within the Center for Government and Law (CORe) of Hasselt University. He graduated in 2014 as a master in Law at the University of Trieste (Italy). The research themes in which Matteo Fermeglia is active include soil protection, environmental liability, climate law and governance. In 2017, Matteo was Visiting Scholar at Columbia Law School, where he actively collaborated with the Sabin Center for Climate Change Law and the Columbia Center on Sustainable Investment.
In 2019, Matteo obtained his doctorate in Law at the University of Udine and Trieste joint PhD programme with a dissertation on the legal nature of EU Emission Trading Allowances, the Renewable Energy Certificates and Energy Efficiency Certificates. Matteo has authored and co-authored several publications in edited books and international journals on diffuse soil pollution, environmental liability, climate law and governance.

“The book is written for environmental professionals, advocates, managers, thinkers, activists, politicians, lawyers - anyone who deals professionally or politically with major environmental issues. … this book is distinctive for its advocacy, for bringing in legal questions, and for its serious philosophical chapters. It includes work by a very wide and diverse network of people who share a commitment to ecological integrity but are otherwise varied.” (Eugene N. Anderson, Doody's Book Reviews, November 13, 2020)