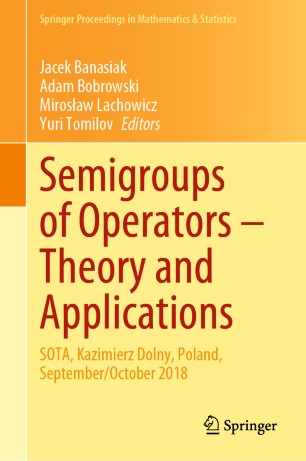 SOTA: Conference on Semigroups of Operators: Theory and Applications

Semigroups of Operators – Theory and Applications

This book features selected and peer-reviewed lectures presented at the 3rd Semigroups of Operators: Theory and Applications Conference, held in Kazimierz Dolny, Poland, in October 2018 to mark the 85th birthday of Jan Kisyński. Held every five years, the conference offers a forum for mathematicians using semigroup theory to discover what is happening outside their particular field of research and helps establish new links between various sub-disciplines of semigroup theory, stochastic processes, differential equations and the applied fields. The book is intended for researchers, postgraduate and senior students working in operator theory, partial differential equations, probability and stochastic processes, analytical methods in biology and other natural sciences, optimisation and optimal control.

The theory of semigroups of operators is a well-developed branch of functional analysis. Its foundations were laid at the beginning of the 20th century, while Hille and Yosida’s fundamental generation theorem dates back to the forties. The theory was originally designed as a universal language for partial differential equations and stochastic processes but, at the same time, it started to become an independent branch of operator theory. Today, it still has the same distinctive character: it develops rapidly by posing new ‘internal’ questions and, in answering them, discovering new methods that can be used in applications. On the other hand, it is being influenced by questions from PDE’s and stochastic processes as well as from applied sciences such as mathematical biology and optimal control and, as a result, it continually gathers new momentum. However, many results, both from semigroup theory itself and the applied sciences, are phrased in discipline-specific languages and are hardly known to the broader community.