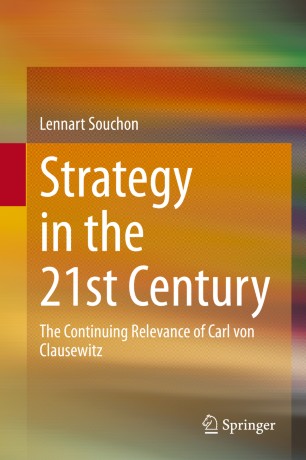 Strategy in the 21st Century

This book presents a detailed discussion of Clausewitz's principal lines of thought and methods of implementation. It elaborates on his main objective of laying a foundation for the education of up-and-coming creative, knowledgeable and experienced future leaders. The book encourages reflection and study in strategic thinking in order to transform knowledge into genuine capability.

The book explores the question of what a twenty-first-century decision-maker can learn from these strategic lines of thought. It bridges the gap between philosophical theory and strategic interaction in conflicts with an equal opponent. Readers learn to understand and employ the clash of wills, attack and defence, and friction, and in essence the necessary virtues of a strategic commander.

The findings presented help to identify the essential features in complex decision-making situations and developing possible courses of strategic action from a holistic standpoint. As such, the book is a must read for strategists, business practitioners, and scholars of political leadership and management interested in a better understanding of strategy and decision-making.

Lennart Souchon is a German strategist and scholar of political philosophy and military theory. He was the Director of the International Clausewitz-Center at the Military Academy of the German Armed Forces from 1999 to 2018 and founded the Clausewitz Network for Strategic Studies in 2008. He also served as Director of Studies at the German Federal Academy for Security Policy Study and is a senior member of the International Institute for Strategic Studies (IISS) in London. Furthermore, Souchon is an Honorary Professor at the University of Potsdam, Germany. His research focuses on strategic studies and strategic theory of the Prussian general Carl von Clausewitz.