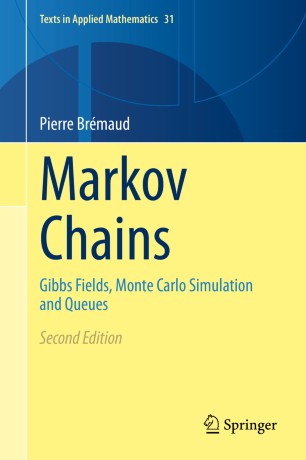 This 2nd edition is a thoroughly revised and augmented version of the book with the same title published in 1999. The author begins with the elementary theory of Markov chains and very progressively brings the reader to more advanced topics. He gives a useful review of probability, making the book self-contained, and provides an appendix with detailed proofs of all the prerequisites from calculus, algebra, and number theory. A number of carefully chosen problems of varying difficulty are proposed at the close of each chapter, and the mathematics is slowly and carefully developed, in order to make self-study easier. The book treats the classical topics of Markov chain theory, both in discrete time and continuous time, as well as connected topics such as finite Gibbs fields, nonhomogeneous Markov chains, discrete-time regenerative processes, Monte Carlo simulation, simulated annealing, and queuing theory.

The main additions of the 2nd edition are the exact sampling algorithm of Propp and Wilson, the electrical network analogy of symmetric random walks on graphs, mixing times and additional details on the branching process. The structure of the book has been modified in order to smoothly incorporate this new material. Among the features that should improve reader-friendliness, the three main ones are: a shared numbering system for the definitions, theorems and examples; the attribution of titles to the examples and exercises; and the blue highlighting of important terms. The result is an up-to-date textbook on stochastic processes.

Students and researchers in operations research and electrical engineering, as well as in physics and biology, will find it very accessible and relevant.

Pierre Brémaud graduated from the École Polytechnique and obtained his Doctorate in Mathematics from the University of Paris VI and his PhD from the department of Electrical Engineering and Computer Science at the University of California, Berkeley. He is a major contributor to the theory of stochastic processes and their applications, and has authored or co-authored several reference books and textbooks.