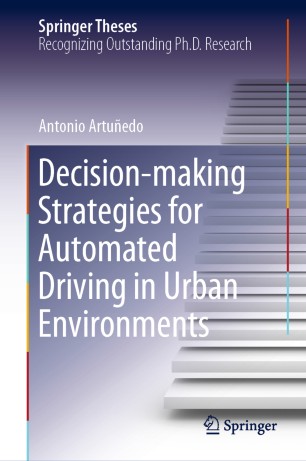 This book describes an effective decision-making and planning architecture for enhancing the navigation capabilities of automated vehicles in the presence of non-detailed, open-source maps. The system involves dynamically obtaining road corridors from map information and utilizing a camera-based lane detection system to update and enhance the navigable space in order to address the issues of intrinsic uncertainty and low-fidelity. An efficient and human-like local planner then determines, within a probabilistic framework, a safe motion trajectory, ensuring the continuity of the path curvature and limiting longitudinal and lateral accelerations. LiDAR-based perception is then used to identify the driving scenario, and subsequently re-plan the trajectory, leading in some cases to adjustment of the high-level route to reach the given destination. The method has been validated through extensive theoretical and experimental analyses, which are reported here in detail.

Dr. Antonio Artuñedo is currently a postdoctoral researcher in the AUTOPIA group at the Centre for Automation and Robotics (CSIC-UPM) in Madrid, Spain. He received a B.Sc. in Electrical Engineering from the Universidad de Castilla–La Mancha, Spain in 2011 and a M.Sc. in Industrial Engineering from the Universidad Carlos III de Madrid in 2014. In 2019, he received his PhD in Automation and Robotics at the Technical University of Madrid (UPM), Spain in the AUTOPIA Program. His PhD degree was awarded with the "Cum Laude" distinction and the International Mention. During his pre doctoral period, he made a research stay at the Integrated Vehicle Safety group at TNO, Netherlands, in 2017. He joined the Centre for Automation and Robotics (CSIC-UPM) in 2013, where he has been working on both national and European research projects in the scope of autonomous vehicles. Antonio has published and peer-reviewed multiple journal and conference articles focused on this research ﬁeld. His research interests include system modelling and simulation, intelligent control, motion planning and decision-making systems.