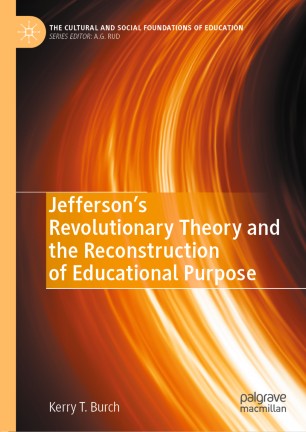 Jefferson’s Revolutionary Theory and the Reconstruction of Educational Purpose

This book newly interprets the educational implications of Thomas Jefferson’s revolutionary thought. In an age where American democracy is imperilled and the civic purposes of schooling eviscerated, Burch turns to Jefferson to help bring to life the values and principles that must be recovered in order for Americans to transcend the narrow purposes of education prescribed by today’s neoliberal paradigm. The author argues that critical engagement with the most radical dimensions of Jefferson’s educational philosophy can establish a rational basis upon which to re-establish the civic purposes of public education. Bracketing the defining features of Jefferson's theory throughout each of the chapters, the author illuminates the deficiencies of the dominant educational paradigm, and charts a new path forward for its progressive renewal.

Kerry T. Burch is Professor of Philosophy of Education at Northern Illinois University, USA. He is the author of Democratic Transformations: Eight Conflicts in the Negotiation of American Identity (recipient of the 2014 Society of Professors of Education Book Award) and Eros as the Educational Principle of Democracy (2000). In his teaching and research, he is committed to a vision of democratic moral education anchored in the need to keep the enlightenment-oriented spirit of education alive.

​“In this book, Kerry Burch offers a reading of Thomas Jefferson that treats him as the founding father of a radical democratic tradition picked up later by John Dewey and others. Jefferson emerges as a moral voice that speaks to the needs of democratic education today. Through Jefferson, Burch seeks to revive not just schools but America’s democratic spirit.”
—Johann N. Neem, Professor, Western Washington University, USA, and author of Democracy’s Schools: The Rise of Public Education in America (2017)

“Burch intriguingly brings Jefferson to bear on significant struggles in American life today. Emphasizing Jefferson’s call to cultivating the critical and experimental dimensions of active citizenship, Burch offers helpful curricular suggestions that cultivate democratic habits, call students to inquiry, and ignite their openness to change. Burch crafts an imaginative space that encourages all of us to reconstruct American democracy and our lives as citizens.”
—Sarah M. Stitzlein, Professor of Education and Affiliate Professor of Philosophy, University of Cincinnati, USA, and author of Learning How to Hope: Reviving Democracy Through Our Schools and Civil Society (2019)

“Democratic education in the United States is endangered. Maybe it is time for a revolution. Kerry Burch reminds us of the insurgent spirit endemic to our nation by returning us to Thomas Jefferson’s educational philosophy and the democratic-revolutionary tradition initiated by the American Revolution.”
—Jim Garrison, Professor in the Foundations of Education Program, Virginia Polytechnic Institute and State University, USA