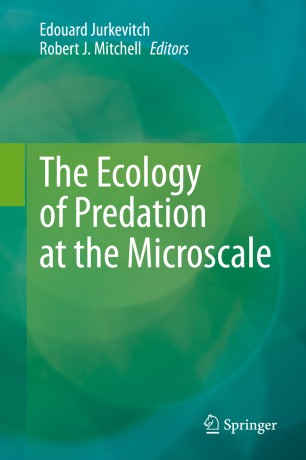 The Ecology of Predation at the Microscale

This work is a collection of articles that discuss microbial predation from a variety of perspectives. It provides the readers a concise resource describing factors that are critical for several different predatory microbes, including Myxobacterium spp. and Bdellovibrio­-and-like organisms (BALOs), including the mechanisms involved, ecological conditions that adversely impact it and potential applications in aquaculture and bioproduction. The first half of this collection focuses more on ecological aspects of predation, with in-depth discussions on “wolf pack” predators, the presence and activities of predators in waste-water treatment plants and the role of intraguild predatory relationships, i.e., when two different predators are competing for a single prey but also interact with one another. The reader will gain a deeper understanding of the predatory mechanisms involved and their ecological roles.

In the latter half, emphasis is given more to the application and limitations of predators. In addition to discussing secondary metabolite production within different microbial predators, the readers will also learn how predators are being used to purify secondary metabolites from prey. This section also discusses the expanding and promising role of predation in aquaculture, focusing on the application of predators to reduce pathogenic populations, but includes some important caveats for young researchers to consider and follow when working with Bdellovibrio.

This work is written for both experienced researchers already in the field and for young scientists who are captivated by the thought of predation at the microscale and its growing importance within a wide-array of fields.

Edouard Jurkevitch studied Soil and Water Sciences for his first and second degree, and Microbiology for his third degree, all at the Hebrew University of Jerusalem (HUJI). He obtained his Ph.D. in Agricultural Microbiology in 1992 for a thesis on ecological and physiological roles of bacterial siderophores. He was a post-doctoral fellow for three years at CNRS in France, where he studied nodule formation in legumes. In 1995, he joined HUJI's Faculty of Agriculture in Rehovot. He has a deep interest in microbial ecology, reflected in his research topics: Predatory interactions between bacteria, from cell-cell interactions to population dynamics; The relationship between feeding strategies in flies and their gut symbionts, and; Soil microbial forensics, a cutting-edge application of microbial ecology.