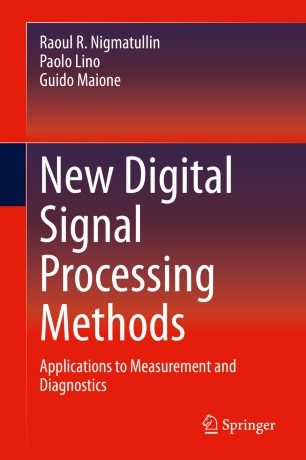 Applications to Measurement and Diagnostics

This book is intended as a manual on modern advanced statistical methods for signal processing. The objectives of signal processing are the analysis, synthesis, and modification of signals measured from different natural phenomena, including engineering applications as well. Often the measured signals are affected by noise, distortion and incompleteness, and this makes it difficult to extract significant signal information. The main topic of the book is the extraction of significant information from measured data, with the aim of reducing the data size while keeping the basic information/knowledge about the peculiarities and properties of the analyzed system; to this aim, advanced and recently developed methods in signal analysis and treatment are introduced and described in depth. More in details, the book covers the following new advanced topics (and the corresponding algorithms), including detailed descriptions and discussions: the Eigen-Coordinates (ECs) method, The statistics of the fractional moments, The quantitative "universal" label (QUL) and the universal distribution function for the relative fluctuations (UDFRF), the generalized Prony spectrum, the Non-orthogonal Amplitude Frequency Analysis of the Smoothed Signals (NAFASS), the discrete geometrical invariants (DGI) serving as the common platform for quantitative comparison of different random functions. Although advanced topics are discussed in signal analysis, each subject is introduced gradually, with the use of only the necessary mathematics, and avoiding unnecessary abstractions. Each chapter presents testing and verification examples on real data for each proposed method. In comparison with other books, here it is adopted a more practical approach with numerous real case studies.

Raoul Rashid Nigmatullin was born 24.09. in 1947 year in Tatar family in the town Kazan, which is being now the capital of Tatarstan Republic located inside the Russian Federation. He was born in the family of the young teacher Rashid Nigmatullin who later became the professor of radioelectronics and electrochemistry and rector of Kazan Aviation Institute. He obtained his intermediate education in Kazan in 1965 year, finishing the specialized school number 131 on physics and mathematics with silver medal. In 1970 year, he finished the physical faculty of Kazan State University with honors and received his Master Degree on specialization of theoretical physics. During 1970-1973 years, he was postgraduate student of the Theoretical Physics Department of Kazan University. From 1974 year he defended successfully his Candidate Thesis (which is equivalent to PhD thesis) and begun to work as an assistant on the department of Theoretical Physics. His PhD thesis was devoted to consideration of kinetics of paramagnets at low temperatures. From 1978 year he worked as a senior lecturer (Associate Professor) in the same department. He recommended himself as a good lecturer and read all traditional subjects of the theoretical physics: theoretical and quantum mechanics, thermodynamics and statistical physics and etc.).

In 1981 year, he participated in competition for the visiting as a probationer to the Great Britain. During of 1982 (September) -1983 (July) he worked as a scientific (postdoctoral) assistant in the laboratory of physics of dielectrics (former Chelsea-college of London University) under the leadership of Prof. A.K. Jonscher who was the well-known specialist in physics of dielectrics. Then in 1990 year, he was invited again for three month in the King's college (London University) to continue his investigations in dielectric relaxation phenomena in laboratory of Prof. Robert M.Hill. During November 1991-January 1992, he was invited by Dr. Alain Le Mehaute (ALCATEL ALSTHOM RESHERCHE, later ISMANS) in France to work in the region of fractal physics.

In 1992 year, he defended successfully his doctorate thesis and obtained the full Doctorate degree of Physics and Mathematics. Beginning from the March 1994 year, he obtained the status of Full Professor in the Department of Theoretical Physics of Kazan State University. The High Attestation Committee from Moscow confirmed officially by the Professor's Diploma his Full Doctorate and Professor Status in 1997 year.

In November of 1993, he was invited by Prof. F. Mainardi to read lectures in Italy to Bologna University devoted to the mathematical physics of fractional calculus. This direction in physics is quite new one and establishes the new relationship between fractal physics and fractional calculus.

Starting from 2015 year, he is working as a contracting professor in Kazan National Research Technical University (KNRTU-KAI). His scientific publications are well known among the specialists working in dielectrics and physics of fractals not only in ex-Soviet Union but in the West as well. He collaborates actively with the scientists of many countries - Great Britain, France, Israel, Turkey, Japan,Italy and PRC.

Under his direct supervision 7 postgraduate students in Kazan Federal University have defended successfully their PhD thesis and one of them Dr. V. Toboev received the degree of Doctor of biophysics.

The American Biographical Institute selected his biography in annual books "The Contemporary Who's Who" (Who's Making a Difference) 2002/2003, 2007/2008 and 2010/2011 years. In 2012 year in the conference “Nonlinear Science and Complexity” (August, Budapest) he received the G. M. Zaslavsky European award for the solution of the Prony problem.

Now he has more than 250 publications in the different journals entering in the SCOPUS and WoS databases and is well-cited scientist among other leading Russian scientists actively working in the modern science. In accordance with the ISI (International Scientific Institute) version his total citation index CItot close to 3000 and the Hirsch index equalled 28.

Each year he receives many invitations for visiting of many international universities for reading lectures related with his personal research. He visited Japan (2007), Turkey (2008/2009), PRC (Guangzhou 2010/2012), Norway (2013). In the 2014 year he read lectures in Shandong university (Jinan city, PRC). In the recent conferences "New Trends in Science and Technology" and "Fractional Derivatives and their Applications" (November 2008, Ankara, Turkey) and in the 4-th conference of "Nonlinear Science and Complexity" (August 2012, Hungary Budapest) he received some awards for his contribution in the development of new methods in signal/noise analysis and the methods of fractional calculus for analysis of different complex systems.

Now being a principal researcher of the radioelectronics and informative measurement-techniques department of the KNRTU-KAI he is actively working in two directions of physics:

2. Development of original non-invasive methods for "reading" of different random sequences in complex and nonlinear systems.

Paolo Lino graduated in Electrical engineering (full marks) at Polytechnic University of Bari, Italy, in 2000, and received the Ph.D. degree in Electronics and Automation from University of Catania, Italy, in 2004. In 2003 he was a Visiting scholar at the ACE Center of University of New Mexico, USA. Currently, he is with Polytechnic of Bari, where he teaches Robotics and Digital Control Systems. He has also been the Teaching Coordinator of the Master Program in “Technological Innovation in Mechatronics” at Polytechnic University of Bari. He is co-author of several papers published in international conference proceedings, international journals or book chapters, and has been part of National and International funded research projects involving leading mechatronics companies. His main research interests are in the field of linear and nonlinear control, fractional-order systems, modelling and control of automotive and mechatronic systems.

Guido Maione is Associate Professor at Polytechnic University of Bari. He received the Laurea (M.Sc.) degree with full marks and honors in Electronics Engineering in 1992 and the Ph.D. degree in Electrical Engineering in 1997, both from Polytechnic University of Bari, Italy. In 1996 he joined the University of Lecce, Italy, where he was Assistant Professor in Automatic Control. Since 31st of December 2002, he moved to the 2nd Engineering School of Polytechnic University of Bari, located in Taranto, Italy. He was Visiting Scholar at the Rensselaer Polytechnic Institute of Troy, New York, USA, in 1997 and visited the Queen’s University of Belfast, UK, in 2007, 2009 and 2013. He has taught more than 40 official undergraduate and postgraduate courses and he is currently member of the Committee of a PhD Doctoral Program at Polytechnic University of Bari, having been member of three other different PhD Committees. His current and past research interests are for: non-integer (fractional) order systems and controllers; modeling and control of automotive systems; crowd evacuation problems; control of multimedia streaming; modelling, simulation, and control of flexible and automated manufacturing systems and intermodal container terminals; soft computing techniques applied to multi-agent systems; discrete event systems, Petri nets and digraph models. Prof. Maione is Associate Editor of the Transactions of the Institute of Measurement and Control and was Guest Editor for various other journals. He is author or co-author of about 150 publications in international/national journals, book chapters and conference proceedings. He is Senior Member of IEEE and IEEE Control Systems Society and affiliate member of IFAC.