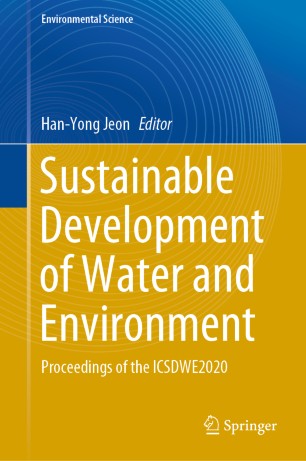 ICSDWE: International Conference on Sustainable Development of Water and Environment

Sustainable Development of Water and Environment

This book focuses on water resources and the economic, financial, social and environmental impacts (ICSDWE) of global warming and climate change. It discusses the links between these aspects and presents cutting-edge research, technology, and practice in these fields. The book is a valuable resource for students and researchers at government organizations, academic institutions, and NGOs.

Prof. Han-Yong Jeon, a geosynthetics/technical organic materials researcher, graduated from the Textile Engineering Department at Hanyang University in 1979. He has worked for Hyejeon College (1982-1990), Howon University (1990–1992), and Chonnam National University (1992–2005), and he currently works for Inha University. Since 1998, he has been the Director of the Geosynthetics Institute (USA)-Korea Directory. He was a council member of the International Geosynthetics Society (2006–2012), and he was the 6th President of the Korean Geosynthetics Society (2011–2013). He is also a member of ASTM D35 and ISO TC221 on geosynthetics. He was the 32nd President of the Korean Fiber Society (2014–2015). He has published more than 842 papers at national and international conferences and 143 papers in national and international journals. He has written 20 Korean and English texts including “Geosynthetics”. He has was listed in Marquis Who's Who-Science and Engineering in 2003–2017 and Top 100 Scientists in the World 2005/2011 (International Biographical Centre, UK). He also received the Korean Fiber Society’s 33rd Academy Award in 2006, and the Korean Federation of Science and Technology Societies’ “Excellent Paper Award of 2012”.