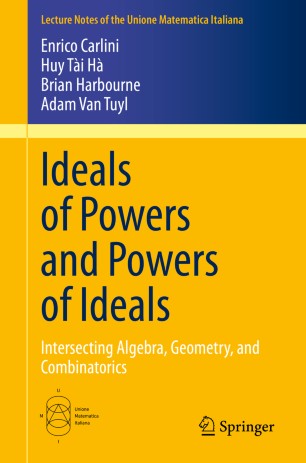 Ideals of Powers and Powers of Ideals

This book discusses regular powers and symbolic powers of ideals from three perspectives– algebra, combinatorics and geometry – and examines the interactions between them. It invites readers to explore the evolution of the set of associated primes of higher and higher powers of an ideal and explains the evolution of ideals associated with combinatorial objects like graphs or hypergraphs in terms of the original combinatorial objects. It also addresses similar questions concerning  our understanding of the Castelnuovo-Mumford regularity of powers of combinatorially defined ideals in terms of the associated combinatorial data. From a more geometric point of view, the book considers how the relations between symbolic and regular powers can be interpreted in geometrical terms.  Other topics covered include aspects of Waring type problems, symbolic powers of an ideal and their invariants (e.g., the Waldschmidt constant, the resurgence), and the persistence of associated primes.