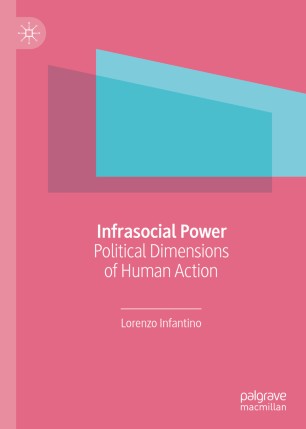 Building from the level of individual interaction, this book intends to shed light on what the author terms "infrasocial power" and the relation between this individual-actor oriented level and public power. In overviewing the origins of power, the author allows for the  disaggregation of the social fabric, thus making it possible to: 1) isolate the “sequence” in which the phenomenon of superordination and subordination materialises; 2) identify the institutional “instruments” which can be used to limit infrasocial power; 3) discriminate between a social position achieved through engagement with others (and what we are capable of doing for them) from one occupied by means of force and deception; 4) explain the birth and function of public power; and 5) analyze the consequences produced by different political regimes.

Lorenzo Infantino is Professor of Philosophy of the Social Sciences at LUISS-Guido Carli in Rome, Italy. He is the author of Individualism in Modern Thought (1998, 2014), reviewed by the late Kenneth Minogue on the first page of the Times Literary Supplement, and Ignorance and Liberty (2003). His research circulates around social and political theory, intellectual history, political philosophy, political economy and sociological theory.