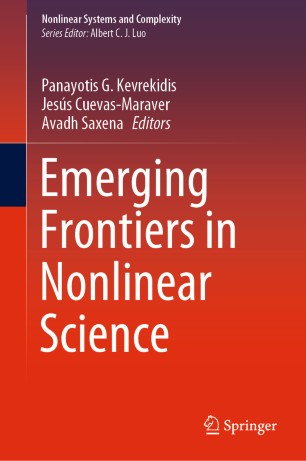 This book explores the impact of nonlinearity on a broad range of areas, including time-honored fields such as biology, geometry, and topology, but also modern ones such as quantum mechanics, networks, metamaterials and artificial intelligence. The concept of nonlinearity is a universal feature in mathematics, physics, chemistry and biology, and is used to characterize systems whose behavior does not amount to a superposition of simple building blocks, but rather features complex and often chaotic patterns and phenomena. Each chapter of the book features a synopsis that not only recaps the recent progress in each field but also charts the challenges that lie ahead.

This interdisciplinary book presents contributions from a diverse group of experts from various fields to provide an overview of each field’s past, present and future. It will appeal to both beginners and seasoned researchers in nonlinear science, numerous areas of physics (optics, quantum physics, biophysics), and applied mathematics (ODEs, PDEs, dynamical systems, machine learning) as well as engineering.

Prof. Panayotis Kevrekidis earned his B.Sc. Degree from the Department of Physics of the University of Athens in 1996. He subsequently joined the Physics Department of Rutgers University from where he earned a M.S. (1998), an M.Phil. (2000) and a Ph.D. (2000) in Physics working under the supervision of Profs. J.L. Lebowitz (Mathematics and Physics) and P.G. Georgopoulos (Environmental Science). His Ph.D. thesis was entitled “Lattice Dynamics of Solitary Wave Excitations.” He then assumed a postdoctoral research post for a year split between the Program in Applied and Computational Mathematics of Princeton University (10/2000-02/2001) and the Theoretical Division and the Center for Nonlinear Studies of the Los Alamos National Laboratory (03/2001-08/2001). From September 2001, he joined the Faculty ranks of the Department of Mathematics and Statistics of the University of Massachusetts (UMass), Amherst, as an Assistant Professor. He was awarded tenure and was promoted to Associate Professor in June 2005. Between September 2010 and September 2015, he was a Full Professor at UMass, Amherst, and since then, he holds a Distinguished University Professorship.

Kevrekidis has received numerous awards and distinctions for his work during his time at UMass. These include, among others, a CAREER award in Applied Mathematics from the US NSF (in 2003), a Humboldt Research Fellowship from the Humboldt Foundation and an Outstanding Paper Prize from the Society for Industrial and Applied Mathematics (SIAM), the 2008 International Stephanos Pnevmatikos Award for research in Nonlinear Phenomena, the 2013 J.D. Crawford Prize of the Activity Group on Dynamical Systems of SIAM and the A.F. Pallas award from the Academy of Athens (2013). He was recently (2014-2015) the Stanislaw M. Ulam Scholar at the Center for Nonlinear Studies in the Los Alamos National Laboratory, and the same year he was elected a Fellow of the American Physical Society (2014). In 2015, he was awarded the Bessel Prize from the Alexander von Humboldt Foundation, and in 2016, he received the inaugural Brooke Benjamin Prize in Nonlinear Waves, as well as a Greek Diaspora Fellowship. In 2017, he was named a Fellow of the Society for Industrial and Applied Mathematics.

His research has been supported by numerous sources such as the US NSF, the US Air Force, the European Research Council as well as numerous private Foundations (Alexander von Humboldt, Alexander S. Onassis Public Benefit Foundation, and US-Israel Binational Science Foundation). Kevrekidis' interests are centered around the nonlinear dynamics of solitary waves in nonlinear partial differential equations and in lattice nonlinear differential-difference equations and the properties (existence, stability, dynamics) of such waves. A focal point of this work concerns the applications of such tools and techniques to systems from Physics (especially nonlinear optics and atomic physics), Materials Science, Biology and Chemistry. He has published over 500 research papers in a wide variety of venues in nonlinear physics and applied mathematics, given over 150 research lectures in conferences and universities around the globe, is an associate editor of 2 journals and has authored 5 books; the first is entitled “Emergent Nonlinear Phenomena in Bose-Einstein Condensates”, while the second is entitled “The Discrete Nonlinear Schrodinger Equation: Mathematical Analysis, Numerical Computations and Physical Perspectives.” They were published by Springer-Verlag in 2008 and 2009, respectively. He published his third book in November 2013, an edited volume together with a number of his collaborators (including present co-editor Prof. Cuevas-Maraver) on “Localized Excitations in Nonlinear Complex Systems: Current State of the Art and Future Perspectives,” again by Springer-Verlag, and his fourth book in 2014 with two co-Editors (once again including co-editor Prof. Cuevas-Maraver) on “The sine-Gordon Model and its Applications: From Pendula and Josephson Junctions to Gravity and High Energy Physics.” His fifth book on “The Defocusing Nonlinear Schr{\"o}dinger Equation: From Dark Solitons to Vortices and Vortex Rings” has been published by SIAM in August 2015.

As quantitative measures of Kevrekidis’ impact to the research community, one can mention the h-index of 54 (in Web of Science, 73 in Google Scholar) and that his work has been cited over 22000 times (according to Google Scholar).

Prof. Jesús Cuevas-Maraver earned his B.Sc. Degree from the Faculty of Physics of the University of Seville in 1999 graduating third with a GPA of 7.87/10.0. He subsequently joined the Department of Applied Physics I Department of the same university where obtained his Ph.D. in Physics in 2003 under the supervision of Prof. Francisco R. Romero and Prof. Juan F.R. Archilla, with a Ph.D. thesis entitled “Localization and energy transfer in nonlinear inhomogenous systems.”. After that, he joined the same department as an Assistant Professor and, from 2009, he is Associate Professor therein. His lectures in Elementary Physics (Mechanics, Thermodynamics and Electromagnetism) take place at the Polytechnic School in the degree of Industrial Chemical Engineering.

His research covers many aspects of Nonlinear Science and is based in the theoretical study of nonlinear localized waves as solitons, kinks or breathers that emerge in many physics systems. He has considered a wide range of such systems, which includes crystals, biomolecules, Bose–Einstein condensates, waveguide arrays, nonlinear circuits or transmission lines and metamaterials. He is a frequent referee in international journals, including Nature Physics, Physical Review Letters or Optics Letters.

Prof. Jesús Cuevas-Maraver has written 120 scientific publications covering international journals and books. He has been author of several chapters in Springer books [P.G. Kevrekidis (ed.), The Discrete Nonlinear Schrödinger Equation (2009); B.A. Malomed (ed.), Spontaneous Symmetry Breaking, Self-Trapping, and Josephson Oscillations (2013); Machado et al. (eds.), Nonlinear Science and Complexity (2011)]. He has co-edited with Prof. Kevrekidis the Vols. 7, 10 and 26 in Springer Series in Nonlinear Systems and Complexity [Localized Excitations in Nonlinear Complex Systems (2014), The sine-Gordon Model and its application (2014) and A Dynamical Perspective on the ϕ4 model (2019)]. He has also co-edited the book Nonlinear Systems. Vol. 1: Mathematical Theory and Computational Methods, which was published in 2018 by Springer-Verlag in the series Understanding Complex Science.

Prof. Avadh Saxena earned his B.E. (Hons) in Electrical and Electrical Engineering and M.S. (Hons.) in Physics from Birla Institute of Science and Technology, Pilani, India, in 1982 and obtained his M.A. (1983) and Ph.D. in Physics from Temple University, Philadelphia, in 1986. After a joint postdoc at the Pennsylvania State University and Cornell University, he came to Los Alamos National Lab in 1990 first as a visiting scientist/consultant and then as a staff member (1993). Since 2009, he has served as the Group Leader of the Physics of Condensed Matter and Complex Systems group at Los Alamos. His research involves a variety of topics ranging from nonlinearity, geometry and topology to the electronic, magnetic, optical and vibrational properties of functional materials as well as phase transitions. He is a Fellow of American Physical Society and a Fellow of Los Alamos National Lab. He is an Affiliate Professor at the Royal Institute of Technology (KTH), Stockholm, Sweden. He also holds Adjunct Professor position at the University of Barcelona, University of Arizona, Virginia Tech and the University of Crete. He is a Scientific Advisor at the National Institute for Materials Science, Tsukuba, Japan.

Dr. Saxena has published more than 450 papers with over 11,000 citations and an h-index of 50 (Google Scholar). He has previously co-edited five Springer books as well as many special journal issues. More than 64,000 chapters in the five Springer books have been downloaded so far. He has an extensive history of research collaboration with Prof. Kevrekidis and Prof. Cuevas-Maraver.