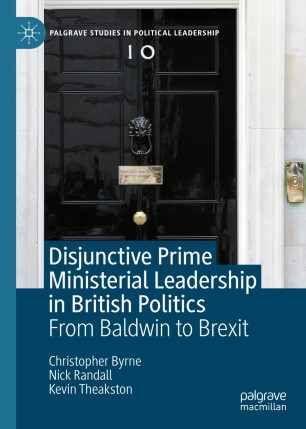 From Baldwin to Brexit

‘The extent to which prime ministers make the political weather or succumb to it has always puzzled political leadership scholars. Confronting such a question, this book presents meaningful comparisons of the circumstances and challenges of prime ministerial leadership, within a framework of disjunctive leadership. Byrne, Randall and Theakston expertly utilise Skowronek’s classic political time approach during three critical junctures in modern British politics. Crucially they argue for a deeper understanding of the role of prime ministerial agency within this “rhythm of time”. A fascinating, comparative evaluation of the exercise of prime ministerial power.’

‘This book could hardly be more timely or judicious in its attempt to help us understand how effective prime ministerial leadership can be practiced during times of crisis. The authors deserve enormous praise for presenting us with an alternative and highly distinctive take on contemporary British political history which focusses on the successes and failures of disjunctive prime ministers. Through applying the concept of political time to a detailed and scholarly analysis of prime ministerial performance, the authors present us with a range of exciting new insights into the character of successful leadership and the dynamics that have helped shape the evolution of British politics. This is a must-read for students and scholars with a broad interest in UK politics.’

This book illustrates the cyclical pattern in the kinds of dilemmas that confront political leaders and, in particular, disjunctive political leaders affiliated with vulnerable political regimes. The volume covers three major episodes in disjunction: the interwar crisis between 1923 and 1940, afflicting Stanley Baldwin, Ramsay MacDonald and Neville Chamberlain; the collapse of Keynesian welfarism between 1970 and 1979, dealt with by Edward Heath, Harold Wilson and James Callaghan; and the ongoing crisis of neoliberalism beginning in 2008, affecting Gordon Brown, David Cameron and Theresa May. Based on this series of case studies of disjunctive prime ministers, the authors conclude that effective disjunctive leadership is premised on judicious use of the prime ministerial toolkit in terms of deciding whether, when and where to act, effective diagnostic and choice framing, and the ability to manage both crises and regimes.

Christopher Byrne is Lecturer in Politics in the School of Social Sciences at Leeds Beckett University, UK.

Kevin Theakston is Professor of British Government in the School of Politics and International Studies (POLIS) at the University of Leeds, UK.