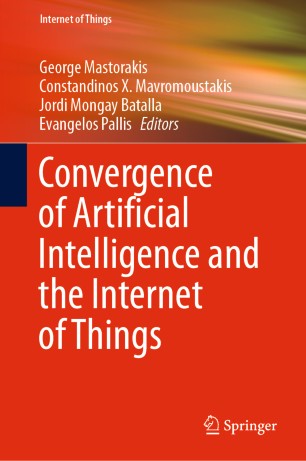 Convergence of Artificial Intelligence and the Internet of Things

Part of the Internet of Things book series (ITTCC)

The book is intended for researchers, practitioners, engineers and scientists involved in the design and development of protocols and AI applications for IoT-related devices. As the book covers a wide range of mobile applications and scenarios where IoT technologies can be applied, it also offers an essential introduction to the field.

George Mastorakis received his B.E. (Honours) in Electronic Engineering from UMIST (University of Manchester Institute of Science & Technology) in 2000, his M.Sc. in Telecommunications from UCL (University College London) in 2001 and his Ph.D. in Telecommunications from the University of the Aegean in 2008. He currently serves as an Associate Professor in the Department of Management Science and Technology at Hellenic Mediterranean University in Greece and as a Director of e-Business Intelligence Laboratory. He has actively participated in a large number of European funded research projects (FP6, FP7 and Horizon2020) and national research ones. He has also acted as a technical manager in many research projects funded by GSRT (General Secretariat for Research & Technology, Ministry of Development, Greece). He has more than 250 publications at various international conference proceedings, workshops, scientific journals and book chapters. His research interests include cognitive radio networks, IoT applications, IoE architectures, radio resource management, artificial intelligence applications, networking traffic analysis, 5G mobile networks, dynamic bandwidth management and energy-efficiency networks

Constandinos X. Mavromoustakis (male, Prof., Ph.D. since 2006) is currently a Professor at the Department of Computer Science at the University of Nicosia, Cyprus. He received a five-year dipl. Eng. (B.Sc., B.E., M.E./KISATS approved/accredited) in Electronic and Computer Engineering from Technical University of Crete, Greece, M.Sc. in Telecommunications from University College of London, UK, and his Ph.D. from the Department of Informatics at Aristotle University of Thessaloniki, Greece. Professor Mavromoustakis is leading the Mobile Systems Lab. (MOSys Lab., www.mosys.unic.ac.cy) at the Department of Computer Science at the University of Nicosia. He is the Chair of the IEEE/ R8 regional Cyprus section since November 2019, and since May 2009, he serves as the Chair of C16 Computer ^230) including several books (IDEA/IGI, Springer and Elsevier). He has served as a consultant to many industrial bodies (including Intel Corporation LLC (www.intel.com)), and he is a management member of IEEE Communications Society (ComSoc) Radio Communications Committee (RCC) and a board member of the IEEE-SA Standards IEEE SCC42 WG2040. He has participated in several FP7/H2020/Eureka and national projects. He is a co-founder of the IEEE Technical Committee on IEEE SIG on Big Data Intelligent Networking (IEEE TC BDIN SIG) and currently serves as a Vice-chair.

Jordi Mongay Batalla (male, Prof. Ph.D.) received his M.Sc. degree from Universitat Politecnica de Valencia (Spain) in 2000 and Ph.D. degree from Warsaw University of Technology (Poland) in 2010. He worked in Centro Nazionale di Astrofisica in Bologna (Italy) and in Telcordia Poland (Ericsson R&D Co.). Currently, he is a Professor at Warsaw University of Technology and he is also with National Institute of Telecommunications, where he is the Deputy Director of research. His research interest focuses mainly on new technologies for mobile networks (network services chain, NFV, SDN, slicing, blockchain) and applications (Internet of Things, smart cities, multimedia) for the future Internet. Jordi Mongay Batalla has coordinated around ten R&D international projects and took part (coordination and/or participation) in more than 10 European ICT research projects, four of them inside the EU ICT Framework Programmes. He is Co-editor of several books on the Internet of Things and 5G, author or co-author of more than 150 papers published in books, international and national peer-reviewed journals (such as IEEE Communications Magazine, IEEE Wireless Communications, ACM Computing Surveys, IEEE Systems and Springer Journal of Real-Time Image Processing) and conference proceedings (e.g. IEEE Globecom, IEEE ICC, IEEE/IFIP IM) and several patent appliances. Jordi Mongay Batalla is Editor of several international journals and magazines and has co-edited special issues in the most important research journals. He is involved in several standardization bodies such as ITU working groups, European Blockchain Services Infrastructure technical group and Polish Normalization Committee.

Evangelos Pallis is a Professor in the Department of Electrical and Computer Engineering at Hellenic Mediterranean University in Greece and Co-director of Research and Development of Telecommunication Systems Laboratory “PASIPHAE” of the same department. He received his B.Sc. in Electronic Engineering from the Technological Educational Institute of Crete in 1994, his M.Sc. in Telecommunications from University of East London, in 1997, and received his Ph.D. in Telecommunications from the University of East London in 2002. His research interests are in the fields of wireless networks, mobile communication systems, digital broadcasting technologies and interactive television systems, QoS/QoE techniques and network management technologies. He has participated in a number of national and European funded R&D projects, including the AC215 “CRABS”, IST-2000-26298 “MAMBO”, IST-2000-28521 “SOQUET”, IST-2001-34692 “REPOSIT”, IST-2002-FP6-507637 “ENTHRONE”, “IMOSAN”,  and as Technical/Scientific coordinator for the IST-2002-FP6-507312 “ATHENA” project. He has been involved within the FP7-214751 “ADAMANTIUM”, in the FP7-ICT-224287 “VITAL++” and in the FP7-ICT-248652 “ALICANTE” projects and several HORIZON2020 projects. He has more than 200 publications in international scientific journals, conference papers and book chapters in the above scientific areas. He is the general chairman of the International Conference on Telecommunications and Multimedia (TEMU), member of IET/IEE and active contributor to the IETF interconnection of content distribution networks (CDNi).