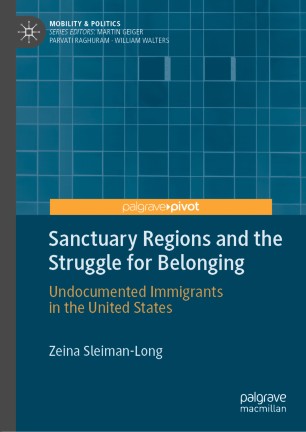 Sanctuary Regions and the Struggle for Belonging

Undocumented Immigrants in the United States

This book argues that local governments and institutions across the state of California that offer various forms of sanctuaries to undocumented immigrants create “sanctuary regions.” These regions are safe zones for undocumented immigrants and facilitate their ability to make claims for human rights. The book also argues that these regions create an important form of resistance to federal state authority in terms of immigration and the management of borders – something that is typically attributed to state power in the study of International Relations (IR). This book includes overviews of how undocumented immigrants make claims for human rights as well as the ways in which sanctuary regions facilitate “acts of citizenship” and resist anti-immigrant policies from a Republican party-run government, including the Trump administration.
Zeina Sleiman-Long serves as the Academic Innovation Consultant at NorQuest College, Canada, where she has taught and led research projects that seek to better understand how educational institutions and public services can become more inclusive and accessible to underrepresented populations.

Zeina Sleiman-Long holds a PhD in Political science from McMaster University. She currently serves as an Academic Projects and Innovation lead at NorQuest College in Canada. Her current work is focused on developing projects that seek to better understand how educational institutions and public services can become more inclusive and accessible to underrepresented populations.