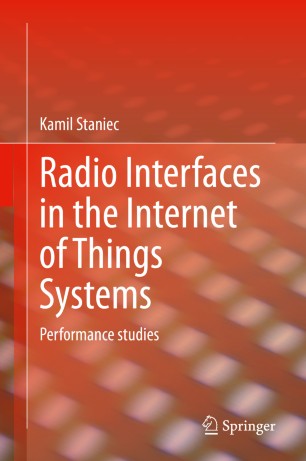 Radio Interfaces in the Internet of Things Systems

The book gives a broad overview of the Internet of Things (IoT) concept from various angles. The book provides rationale for: the concept development; its regulatory and technical background associated aspects such as the ambient and edge intelligence; fog computing; capillary networks and machine-type communications; etc. Each of these items is then extended in further respective chapters that deal with technicalities behind them. Chapters: 2-5, 8, 10-11 are addressed to those who seek expository IoT-related information on aspects such as the pathloss calculation, narrowband radio interfaces, radiation masks, spectrum matters, medium access control, and a transmission frame construction. That section ends with an exhaustive description of the six most popular IoT systems: LoRa, Weightless, SigFox, NB-IoT, LTE-M(TC) and EC-GSM IoT. Specialists and network designers may find chapters 6 and 7 interesting where a novel methodology is proposed for testing narrowband IoT systems performance for immunity to electromagnetic interference (EMI) and multipath propagation, both emulated in artificial conditions of the anechoic and the reverberation chamber.

Kamil Staniec obtained his M.Sc. in Engineering (with honors), specialization in Telecommunications and Computer Science, from Lodz University of Technology (LUT) in 2001 and then a Ph.D. degree (with honors) in Telecommunications from Wroclaw University of Science and Technology (WUST) in 2006 where he also took a position of an Assistant Professor specializing in the radiowave propagation modelling as well as in inter- and intra-system electromagnetic compatibility in wireless sensor networks (WSN). In 2014 he was awarded a D.Sc. in radio communications and became an Associate Professor with WUST. His research interests have evolved since then from WSN towards the narrowband IoT systems, both Low Throughput and Cellular, with particular attention to their radio interfaces performance in the noisy, interference and multipath radio channel.