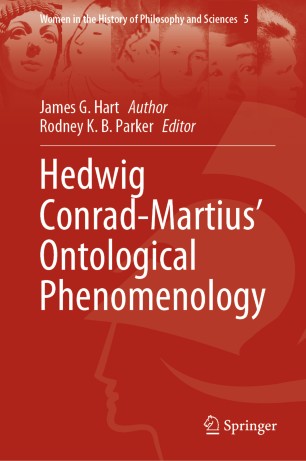 Part of the Women in the History of Philosophy and Sciences book series (WHPS, volume 5)

This book presents an introduction to the metaphysical philosophy of nature put forward by Hedwig Conrad-Martius (1888-1966). Providing a unique perspective on central issues in modern and contemporary theoretical biology and physics, it will be of interest to anyone studying the history of the phenomenological movement as well as religious cosmology.

The philosophical basis for this cosmology is Conrad-Martius’ “realontology”—a phenomenological account of the essence of reality. His position centers on the revival of ancient metaphysical themes in new transformed guises, especially potentiality and entelechy.

Nature’s status, as a self-actuation of world-constituting essence-entelechies, places Conrad-Martius at the heart of philosophical-theological discussions of e.g. the hermeneutical mandate of demythologization as well as the nature of evolution. Of special interest is his insistence on both nature’s self-actuating and evolving powers and a robust theory of creation.

James G. Hart is a Professor Emeritus at Indiana University, Bloomington, where he taught in both the Department of Religious Studies and (as an Adjunct Professor) in the Philosophy Department from 1972 until 2001. His previous works include The Piety of Thinking (Indiana University Press, 1976, with John Maraldo), The Person and the Common Life (Springer, 1992), and Who One Is  (two volumes, Springer, 2009).

Rodney K.B. Parker is an Assistant Professor of Philosophy at Dominican University College in Ottawa, Ontario. From 2017 to 2018, he was the lead researcher for Women in Early Phenomenology at the Center for the History of Women Philosophers and Scientists, University of Paderborn. He is also a former Adjunct Professor at the University of Western Ontario and Visiting Scholar at the Husserl Archives, KU Leuven. His areas of specialization are Husserl’s transcendental phenomenology and the history of the phenomenological movement.