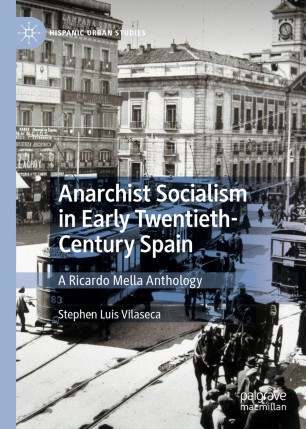 “This book provides an invaluable glimpse into Spanish anarchism for English language speakers. Vilaseca capably reflects on where his voice sits in relation to Mella’s, offering an account that is hybridized, lively, and highly relevant to the contemporary moment of social struggle.”

“We have a vital need for works like this book by Stephen Vilaseca, which rediscovers, translates, and puts in their contexts the works of activist Ricardo Mella. Most welcome!”

“This anthology will inspire contemporary revolutionaries who want to recall the roots of the debates, principles, and utopias proposed by early anarchists and socialists.”

“This book provides a much-needed introduction to a central figure in the history of the Spanish anarchist movement. The incisive introductory essays bring Mella’s work into dialogue with current theoretical and activist approaches in urban studies and other fields.”

This book is the first English translation of and critical introduction to Ideario, a collection of newspaper and journal articles written by Spanish anarchist Ricardo Mella. Given that Mella is virtually unknown to the English-speaking world, this book provides readers access to his extensive body of work about Spain, human nature, and a world increasingly dominated by capitalism. Suitable for both the general public interested in learning more about anarchist ideas and for scholars studying twentieth-century Spain, the three introductory essays help to introduce Mella, ground his work in the context of Spanish anarchism, and draw connections between Mella and the urban. Stephen Luis Vilaseca’s translation is accessible and engaging.

Stephen Luis Vilaseca is Associate Professor of Spanish at Northern Illinois University and co-Associate Editor of the Journal of Urban Cultural Studies. He is the author of Barcelonan Okupas: Squatter Power! (2013).

Stephen Luis Vilaseca is Associate Professor of Spanish at Northern Illinois University and co-Associate Editor of the Journal of Urban Cultural Studies. He is the author of Barcelonan Okupas: Squatter Power! (2013).