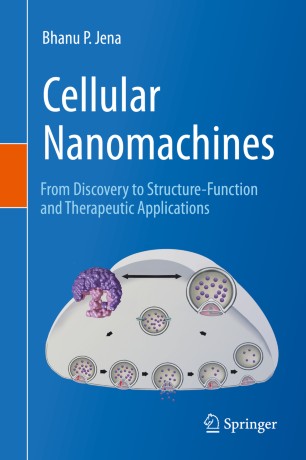 From Discovery to Structure-Function and Therapeutic Applications

In this book, the major paradigm-shifting discoveries made in the past century on key cellular nanomachines are described in great detail: their complex yet precise and elegant design and function, as well as the diseases linked to their dysfunction and the therapeutic approaches to overcome them. The major focus of this book is the “porosome” nanomachine, the universal secretory portal in cells. This is an ideal book for students, researchers, and professionals in the fields of nanoscience and nanotechnology.

Bhanu P. Jena is George E. Palade University Professor & Distinguished Professor of Physiology at Wayne State University School of Medicine, and Director of the NanoBioScience Institute. In 1996 while an Assistant Professor at Yale University School of Medicine, he discovered the ‘porosome’, a new cellular nanomachine that serves as the secretory portal in cells. Prof. Jena is the recipient of numerous awards and honours, among them six honorary doctorates, the Aaron Klug Award, Palade Gold Medal, and AAAS Fellow. He received his Ph.D. from Iowa State University followed by postdoctoral training as a Swebilius Fellow at Yale University.