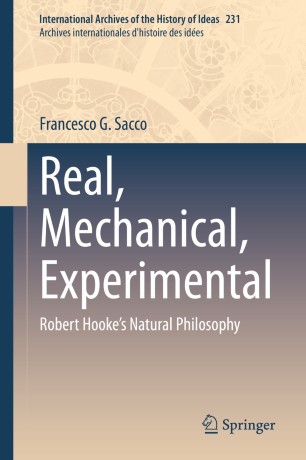 This original work contains the first detailed account of the natural philosophy of Robert Hooke (1635-1703), leading figure of the early Royal Society. From celestial mechanics to microscopy, from optics to geology and biology, Hooke’s contributions to the Scientific Revolution proved decisive. Focusing separately on partial aspects of Hooke’s works, scholars have hitherto failed to see the unifying idea of the natural philosophy underlying them. Some of his unpublished papers have passed almost unnoticed. Hooke pursued the foundation of a real, mechanical and experimental philosophy, and this book is an attempt to reconstruct it. The book includes a selection of Hooke's unpublished papers.

Readers will discover a study of the new science through the works of one of the most known protagonists. Challenging the current views on the scientific life of restoration England, this book sheds new light on the circulation of Baconian ideals and the mechanical philosophy in the early Royal Society. This book is a must-read to anybody interested in Hooke, early modern science or Restoration history.

Francesco G. Sacco teaches modern history at CATS College, Canterbury (UK). He has previously been visiting lecturer at Salisbury University in the United States, and post-doctoral research fellow at the Warburg Institute, University of London, and the University of Calabria, Italy. His research interest is primarily in the emergence of experimental sciences in early modern Europe. His latest publications include ‘Bacon and the Virtuosi: Experimental Contingency and Mechanical Laws in the Early Royal Society,’ in Contingency and Natural Order in Early Modern Science, edited by Pietro D. Omodeo and Rodolfo Garau.