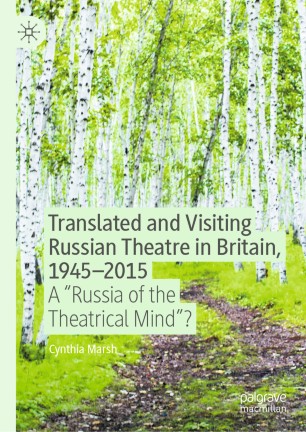 A "Russia of the Theatrical Mind"?

This book tackles questions about the reception and production of translated  and untranslated Russian theatre in post-WW2 Britain: why in British minds is Russia viewed almost as a run-of-the-mill production of a Chekhov play. Is it because Chekhov is so dominant in British theatre culture? What about all those other Russian writers?  Many of them are very different from Chekhov. A key question was formulated, thanks to a review by Susannah Clapp of Turgenev’s A Month in the Country: have the British staged a ‘Russia of the theatrical mind’?

Cynthia Marsh is Emeritus Professor of Russian Drama and Literature, University of Nottingham, UK. She has written extensively on Chekhov and Gorky as dramatists, and directed her own translations from Gorky, Ostrovsky and Chekhov. She has curated two exhibitions at Nottingham on Soviet war posters and on the marketing of Chekhov in Britain.