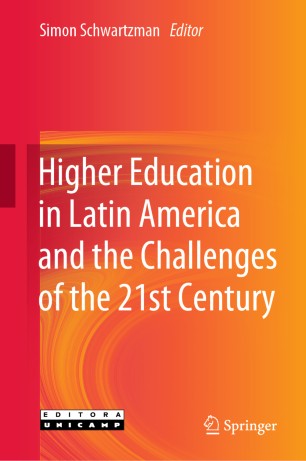 The boom of Latin American higher education is analyzed in this contributed volume by leading experts from the region. They discuss the causes and consequences of this massive expansion and the challenges they pose for different stakeholders such as governments, private entrepreneurs, teachers, researchers, students, policy makers, educational managers and many other social groups. Topics discussed in the volume include:Higher Education in Latin America and the Challenges of the 21st Century will be a valuable resource for educational researchers, sociologists, political scientists and other social scientists dedicated to the study of the expansion of higher education and its social implications in different parts of the world. The book will also be of interest to policy makers s and both public and private agents interested in understanding the global dynamics of higher education.

Simon Schwartzman is an Associate Researcher at the Instituto de Estudos de Política Econômica/ Casa das Garças in Rio de Janeiro, and a member of the Brazilian Academy of Sciences. He studied sociology and political science at the Federal University of Minas Gerais and the Latin American School of Social Sciences (FLACSO, Chile), and holds a PhD in political science from the University of California, Berkeley. He was professor of Political Science and scientific director of the Research Center on Higher Education at USP between 1990 and 1994, and President of the Brazilian National Statistical Office (IBGE) between 1994 and 1998.  He is the author of, among others, A Via Democrática: Como o Desenvolvimento Econômico e Social Ocorre no Brasil (Elsevier, 2014); Brasil: A Nova Agenda Social (with Edmar Bacha, Editores). Rio de Janeiro, LTC, 2011; and  Políticas educacionais e coesão social : uma agenda latino-americana (with Cristian Cox), Rio de Janeiro, Elsevier; São Paulo: iFHC, 2009.