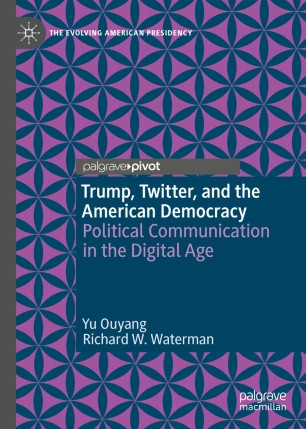 Political Communication in the Digital Age

“Ouyang and Waterman have crafted a fascinating book that examines the Twitter-verse of Donald Trump. More importantly, their well-written effort challenges many of our assumptions about modern presidential rhetoric studies. They put forth the concept of ‘going directly public’ (GDP) which looks at how a president engages the public and uses media power to shift the political system.”

This book takes a social science approach to address two related questions: (1) what does Donald Trump say on Twitter? and (2) why? Since entering the 2016 Presidential Election, Donald Trump’s tweets have been a major part of his communications strategy with the public. While the popular media has devoted considerable attention to selected tweets, it is less clear what those selected tweets tell us about Trump the businessman, the political candidate, and, finally, the President of the United States. We argue that to fully understand Trump, we must take a more comprehensive approach to examining all of his activities on Twitter. Overall, our analysis presents a strikingly complex picture of Trump and how he uses Twitter. Not only has his pattern of tweets changed over time, we find that Trump’s use of Twitter is more deliberate than he has been given credit. Like most other politicians, Trump is strategically-minded about his presence on social media.